The (other) books behind "The Terror" 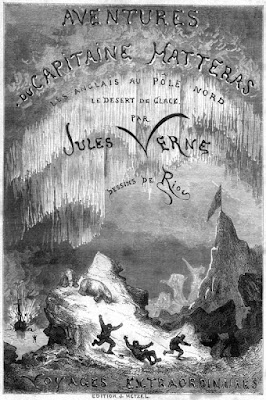 In browsing my Twitter feed about AMC's new series "The Terror," I was a little surprised to see a --possibly mock -- complaint hurling an obscenity at any show that starts by "making me read." Fair enough, mate; no one's really going to make you read -- but for those who might want to read more about the story behind the show, I thought it might possibly be helpful to offer a few recommendations. After all, the Franklin story has been the principal or partial subject of well over a hundred books, including not only historical studies, but more than two dozen novels, many written long before Dan Simmons's, on which the series is based. When you consider that Jules Verne wrote one of the first, The Adventures of Captain Hatteras, back in 1864, you have some idea of the length of this interest; between fiction and nonfiction the list of possible readings seems almost too much for even the most voracious reader to tackle. So where to begin? Herewith, some suggestions.

Until 2014, neither of Franklin's ships had been found, a circumstance which limited the scope of history but served as a spur to fiction. Those who love Tobias Menzies' portrayal of James Fitzjames have two excellent choices on either side: John Wilson's novel North With Franklin: The Lost Journals of James Fitzjames, and the late William Battersby's biography James Fitzjames: The Mystery Man of the Franklin Expedition. For viewers who want to learn more about Ciarán Hinds's Franklin, there's Andrew Lambert's biography (thorough a bit tedious, in my view), or the more wide-ranging and lively The Man Who Ate His Boots by Anthony Brandt. And those -- and there are many -- who've been especially drawn in by Jared Harris's darkly brilliant portrayal of Francis Crozier can turn to Michael Smith's Captain Francis Crozier: Last Man Standing.

The Franklin mystery has been with us so long that the history of the search itself has been a recurring topic. My own book, Finding Franklin: The Untold Story of a 165-Year Search, is perhaps the widest overview, but there are other books that focus on specific searchers or aspects of the search, such as David C. Woodman's Unravelling the Franklin Mystery , which looks at what the long tradition of Inuit testimony, leading to the discovery of HMS "Erebus" in 2014. That discovery itself is the subject of John Geiger and Alanna Mitchell's Franklin's Lost Ship. Geiger was also the co-author, along with anthropologist Owen Beattie, of the 1987 classic Frozen in Time, detailed what was -- until the AMC series -- the most graphic and grisly of discoveries, the three bodies of Franklin sailors exhumed on Beechey Island in the 1980's. Last, and far from least, many viewers have been curious about the Inuit legends and beliefs that the series incorporates. Unfortunately, there's not yet a readily-accessible (i.e., non-specialist) introduction to the topic; the best way to learn about it remains the stories themselves. Here, I'd recommend two collections of tales: Lawrence Millman's A Kayak Full of Ghosts, which collects stories from Greenland to the central Canadian Arctic, along with Dorothy Eber's Encounters on the Passage: Inuit Meet the Explorers. Millman gives a wide range of traditional tales, while Eber collects modern versions of Inuit stories that relate to their encounters with Franklin and other explorers. Perhaps not surprisingly, Franklin's men, wandering about suffering from scurvy, exposure, and starvation, have been transformed in some traditions into hollow-faced bogeymen with which to frighten children.

There are many other books -- a true "Franklinlite" can never have enough! -- but these offer a good start.
Posted by Russell Potter at 10:56 AM