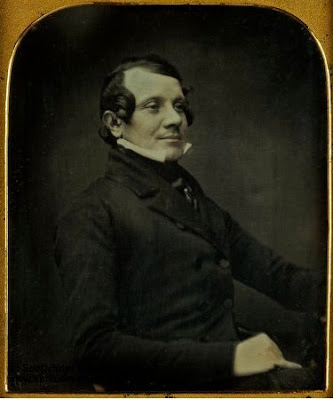 Due in large part to his icily brilliant portrayal by Alistair Petrie in AMC's current series "The Terror," Stephen Samuel Stanley has moved into sudden prominence among Franklin's officers and men. Petrie seems to have picked up on a certain hint of haughtiness, which seems to me evident in his Daguerreotype: he is posed at his ease, face at a perfect 3/4 angle, with just the slightest hint of a smile -- doubtless one of self-satisfaction. In the series, Petrie expands this into a consistently arch, aloof, private man, who repeatedly emphasizes that Mr. Goodsir is not a doctor, while he is "Doctor Stanley."

But who was he in real life? Was he in fact a doctor of medicine? And who is the mysterious "daughter" alluded to in one episode (she appears in a drawing in his journal), the one who may (or may not) love birds?

Stephen Samuel Stanley qualified and entered the Navy as an assistant surgeon on June 5th, 1838. There were a number of ways he could have qualified for this post -- a degree in medicine was not required, -- although there is a record indicating he studied for a time under Sir William Fergusson, at the time Britain's leading anatomist and later sergeant-surgeon to HM the Queen. As with many of the other younger officers, Stanley first saw active duty in the China War of 1842, aboard HMS Cornwallis. The Cornwallis, a 74-gun third rater, saw considerable action, and was selected as the site for the Treaty of Nanking to be signed. Remarkably, although built in 1813 (the same year as HMS Terror), the Cornwallis was converted to a jetty and survived until 1957, when she was broken up at Sheerness.

As to Stanley himself, the record is less clear. Although it's not often mentioned -- and wasn't apparently known to some of his brother officers -- he was married, and had at least one (step) child, a son, Samuel Leopold Stanley, who died in 1861 at the age of 27 in Hastings. This would have made him a lad of eleven when the Franklin expedition sailed. Curiously, the record shows that our Stephen married Mary Ann Windus on May 10th, 1845 -- this would have been scarcely ten days before the ships sailed! This raises the possibility that the son was Mary's from a previous marriage -- and yet, for whatever reason, Stanley did not alter his will of 1839, which made no mention of, or provisions for, any family. Mary Ann died in 1873 at the age of 67, and was mentioned in her notices as Stanley's widow; although the AMC series makes reference to a daughter, there is no record of any other children. A genealogist of the Windus family, who has done a good deal of digging into the matter, believes that the son was in fact Mary Ann's, born as Samuel Leopold Speight -- Speight being the name of her first husband, Samuel Speight, from whom she'd separated after he was declared a bankrupt in 1835. It's a tangled web, indeed.

Regarding his character and habits, we have only a few fragmentary scraps of evidence. James Fitzjames, who served with him in China and was likely responsible for his appointment, seems to have thought highly of him, though he didn't pass over his faults:


"He was in the Cornwallis a short time, where he worked very hard in his vocation. Is rather inclined to be good-looking, but is fat or flabby as if from drinking beer, with jet-black hair, very white hands (which are always abominably clean), and the shirt sleeves tucked up; giving one unpleasant ideas that he would not mind cutting one's leg off immediately -- 'if not sooner.' He is thoroughly good-natured and obliging, and very attentive to our mess."

Harry Goodsir, the expedition's assistant surgeon and naturalist, who served directly under Stanley, was somewhat less charitable in his letters home:


"Stanley  is a  would-be great man who as I first supposed would not make  any effort  at work after a time. He is at present however altho  he knows nothing whatever about his subject & is ignorant enough of  all other  subjects showing it more than any other person I  ever  met with in consequence of his speaking so much."

There is only one other, enigmatic clue as to the fate of Stanley. On Montreal Island, a search expedition led by James Anderson found two small pieces of wood; on one was scratched "Erebus" and on the other "Mr Stanley." Thinking back to his character as played by Petrie, one may well wince at this final demotion to "Mr." -- and wonder if, just perhaps, the wood was a little singed around the edges.
Posted by Russell Potter at 7:00 AM