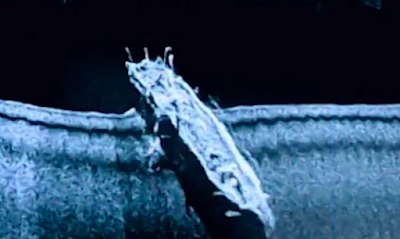 The discovery of HMS "Terror" in Terror Bay continues to make headlines around the world, even as, for the most part, the news stories repeat the same basic information. Now that the Parks team is back in Ottawa, we're learning a good deal more; for the benefit of those who may not have had access to the press event yesterday with Ryan Harris and Marc-André Bernier, I thought it would be useful to share the highlights of their comments and responses to reporters' questions.

Most of the questions centered on the "Terror," though quite a few of the follow-up questions asked after "Erebus" as well. The Parks Canada team confirmed a number of things that had been reported earlier, but with notable new details. Although only able to manage three dives in the short time they had at the site, they also took new side-scan and multi-beam images of the wreck. Silt reduced the visibility, and Ryan Harris reported that the entire deck was covered with a layer of silt which -- though an excellent preservative -- made it difficult to see any smaller artifacts. Larger structures, though, were readily visible; Harris mentioned the flue pipe for the Sylvester Patent stove (this is closer to the forward part of the vessel, and distinct from the exhaust pipe from the engine which was seen in the previously-released video); both sets of davits were in place (in contrast to those of the "Erebus," which had been torn off, with part of one davit being the clue that helped pinpoint the ship). He noted the presence of an anchor cable (rope) coming out of one of the hawse pipes, trailing off a short distance, and what may be an anchor, very close to the hull. He noted the probability of intact ships' cabins, the partitions still in place, the hatches closed, suggesting a "largely sealed environment which would be ideal for the preservation of organic materials" including "otherwise delicate materials, written documents, charts, and material like that," calling the wreck "extremely promising."

Another aspect of the "Terror" is how it got there -- whether it was re-manned, and whether indeed the site where it is currently located is the site where it was last occupied by its crew. Asked about the state of the hull, Harris replied that "certainly from the side scan and multibeam it appears to be remarkably intact from stem to stern," and noted the stunning state of preservation of the bowsprit. There will be, both Ryan and Marc agreed, a "lot of work" to be done, and there's great anticipation of next year's dive season -- as Ryan put it, "it's going to be a long winter."

There were also some fascinating revelations about HMS "Erebus." According to Harris, Franklin's cabin is too damaged to reveal much, and is covered with collapsed beams that may have to be shifted or removed. However, they have had a peep into the senior officers' cabins on the port side -- these would have been those of the 1st and 2nd lieutenants (Gore and Fairholme). In these cabins, Harris described being able to see their bedplaces, including the ornate scrollwork on the sides of their beds or bunks, which according to the ship's plans have built-in drawers. These, along with the previously discovered seaman's chest, offer what Marc described as potentially "pristine pockets" of materials. Both Ryan and Marc also described their efforts to document evidence of Inuit presence aboard the ship, and their "harvesting" of useful materials, much of which ended up dispersed throughout the Arctic via trade.

There was, however, one great disappointment, as it was revealed that the crew of the Martin Bergmann, which is funded by the Arctic Research Foundation, delayed notification of the find of the "Terror" for a week, during which time they apparently were able to return to Cambridge Bay, acquire a ROV, make their video, and provide the information for Paul Watson's exclusive story in the Guardian -- all before they let Parks Canada know of their find. Those eight days, when -- apparently -- conditions were ideal, were lost to the Parks team, and what could be learned this season considerably reduced. The crew of the Bergmann's explanation, that there was not an "updated protocol" in place, seems flimsy indeed. While they certainly deserve credit for the discovery, this revelation begs the question: what more might we have learned, if not for their silence?
Posted by Russell Potter at 6:54 AM