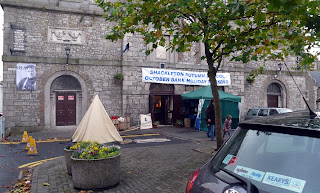 By all accounts, this year's Shackleton School in Athy has been the most varied, the most lively, and the most well-attended in the nine years it has been held. As this is my first year, I can't vouch for that, but it has certainly been the most delightful polar conference event I've ever given a paper at. In this post, I'll do my best to give some account of the highlights, and (hopefully) deliver some sense of what it's been like to be there. The riches have been so great that I'm sure that I'll have left something out, but it won't be because it was any less delightful than the rest.
Saturday morning opened with a lovely presentation by Hans Kjell Larsen, the grandson of the Antarctic captain C.L. Larsen. This talk was unique in that it combined historical images of Larsen's achievements with contemporary photos of some of the sites he explored, which his grandson had revisited nearly a century later. He was followed by Professor Andrew Lambert, who gave a capable and compelling account of Sir John Franklin's career and his final expedition. Lambert's lecture was amply illustrated with documents and photographs, and if any Shackleton buffs at his talk were unacquainted with Franklin's career, it gave them a perfect primer of North Polar disaster. After lunch, Dr. David Wilson gave a richly illustrated account of Shackleton's expedition aboard the Nimrod, which certainly had the same effect for me; of all the lectures, his was the most polished in presentation.
Then it was time for my own presentation. I used as my main (actually, my only) visual aid the 1928 Gould map, with which I was able to illustrate all the efforts to find some more final resolution of the Franklin mystery in the wake of McClintock's determinations of 1859. In particular, I talked at length about the Inuit evidence gathered by Charles Francis Hall, and later analyzed with such diligence by David C. Woodman. I also discussed the vital contributions of other amateur searchers, ranging from Hall to Barry Ranford, and offered the conclusion that the progress we've made, and any hope for an eventual solution, are absolutely dependent on collaboration of both amateur and professional searchers.

As my talk concluded, it was off to a drinks party at the lovely home of the conference's host, Frank Taaffe. We were welcomed into an ornate sitting room, with a crackling fire burning and Bob Headland taking a turn at serving drinks. Shortly after, a group of us were beckoned into the inner sanctum -- a library of mostly Antarctic (and a few Arctic) volumes that would rival any the world over. I took a particular interest in several sets of polar Magic Lantern slides, each still in its original box with its folded paper lecture. Many of us there, myself included, took the opportunity to sign copies of our own volumes. From here, it was off to the annual dinner a mile or so out of town in an elegant hotel banquet room. Guests enjoyed their choice of salmon, steak, or chicken, as we were regaled by a delegation from a local seisún, featuring the rather unusual combation of three pipers and a banjo player. A Nimrod trivia quiz was also distributed to each table, with the night's laurels going to table eight (for which, although it was my table, I can take absolutely zero credit).

Somehow, on our return to town, a number of us found the energy to gather at O'Brien's pub for a final round of pint-lifting. The next morning, though we were all unaccountably feeling a tad groggy, we gathered again to hear Dr. Michael Rostove guide us through "The Great Books of Shackletonia." As a book collector myself, even though these titles were out of my area (and in most cases, out of my budget as well!), I found his account fascinating, especially with regard to the printing points of Aurora Australis, the first book entirely printed and bound in the Antarctic. After the tea-break which followed his talk, the lecture hall quickly filled to capacity, with scarce standing room at the back, in anticipation of Lady Marie Herbert's talk, "The Way of the Explorer." Speaking with quiet dignity and nimble wit, she recounted her first meeting with Sir Wally Herbert, and some remarable stories from the time they spent together in Northwest Greenland with their daughter Kari. Her talk was beautifully illustrated with photographs from the time, and her account of her own journey after loss to the world of Native American spiritual practices was especially moving. At the conclusion, there was a long and lasting roar of applause, followed by so many questions that Seamus Taaffe, in charge of the proceedings, was obliged to ask other questioners to wait until the afternoon forum.

Lunch came again -- for some -- while my good friend Dr Huw Lewis-Jones and I put the final polish on our program of polar films. The audience was delighted with our choices, paricularly (if I may say) with our screening of Georges Méliès's 1914 "Conquest of the Pole," for which I provided a few wry vocal annotations. During part of the sequence, I was joined my old friend Kenn Harper, as we showed some materials about early Arctic films related to turn-of-the-century "Esquimaux" villages at World's Fairs. Everyone seemed delighted with our final film "Frigid Hare" (1949), a Bugs Bunny classic which has Bugs rescuing a sad-eyed little penguin from a ravenous Eskimo.

The conference concluded with the traditional forum, in which all the lecturers took questions from the audience, with Bob Headland serving as host. At the conclusion of the forum, he introduced Irish Green Party TD Mary White, who announced that Ireland is to subscribe to the interntional Antarctic Treaty, in part as a tribute to Sir Ernest Schackleton, as well as to the efforts of the Shackleton School in lobbying for this result. A thunderous round of applause followed.

Further proceedings, following tradition, were continued for a final night at O'Brien's, where nearly everyone was present for at least part of the evening. I was particularly pleased to have another chance to talk with Joe O'Farrell, whose guest posting on this blog was very widely commented upon, and who is surely one of the stalwarts of the School, having attended every year since it was founded. From Joe we all learned a new turn of phrase, as he's fond of using the word "chuffed" -- which in North America means something like "heated," but in Ireland means "delighted" instead. So, as Joe might say, I'm absolutely chuffed to say what a wonderful time I had at the Shackleton school this year, and although next year will mark its tenth anniversary, the organizers will have their work cut out for them improving on this year's success.
Posted by Russell Potter at 6:17 AM