The book in Le Vesconte's Hand 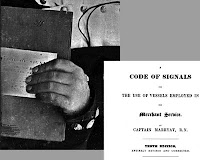 In the earlier discussion of the Franklin daguerreotypes on this blog, there was much speculation about the book visible in the hand of Henry T.D. Le Vesconte. Some hoped that it might indeed be the logbook of H.M.S. "Erebus," that very volume which, were it to be found today, could solve so much of the Franklin mystery. A few days ago, with the help of Dr Huw Lewis-Jones at SPRI, I was able to have a look at a super high-resolution image of the Le Vesconte daguerreotype. On zooming in, we saw to our suprise that it was a far more prosaic tome, with the label "Code of Signals" pasted upon its cover and the indication 3/1 (or 311) written above and to its right (click on the image for a better-resolution version). From this, Huw was able to identify the volume; in his own words,

"After a fair amount of guesswork and reasoned elimination, I would suggest this is probably Captain Frederick Marryat's widely used, classic, 'Code of Signals' or, to give it the full title, 'A Code of Signals for the Use of Vessels Employed in the Merchant Service.' An 8th edition was published in London, 1841, and it's possible a revised edition was issued in 1845, a few years before Marryat died. It was first published in 1817 and was still in use, officially and unofficially, into the 1890s. Vesconte's copy certainly looks like a special edition of some sort, possibly given by a friend or colleague to wish him well on his voyage into the unknown. Of course, until more research is done, we can't possibly know the details."

The inset image on the right in the composite above is taken from a Google Books scan of the 10th edition, which came out in 1847, a little too late for Le Vesconte, but as it seems likely he would have taken the most recent edition, it may well be that of 1841. Although the book itself is unremarkable, its author, Marryat, brings a rich resonance to the image. Marryat was an acquantance of Dickens and a prodigious novelist, who more or less established the classic narrative arc of the "sea story" in which some likely lad runs away to sea, faces a series of challenges and adventures, and eventually rises to the rank of Captain. The earliest of these, The Naval Officer, or Scenes in the Life and Adventures of Frank Mildmay (1829), was said to be partly autobiographical. Who knows but that some of the younger lads aboard Franklin's ships might have been inspired by such tales?

In wartime, Royal Navy signal books were often bound in lead, so that, should an enemy overrun the vessel, they could be thrown overboard and counted on to sink. The one in Le Vesconte's hand looks almost to be made of wood -- perhaps a measure to ensure that it would float if dropped. This also suggests to me that such a specially-bound volume may well have been enhanced by additional signals; some systems of the day included specific signals designed for surveying coastal areas, a labor in which we know Le Vesconte and Fitzjames were enagaged in even before the ships left Greenland. The 3/1 indication looks at first like a price, but perhaps this simply means it was one of three copies.

I'll have more to say about Le Vesconte in my next post, but for now, suffice it to say that this offers another instance of how the remarkable level of detail preserved by the Daguerreian process offers numerous avenues for further discovery.
Posted by Russell Potter at 11:14 AM