Guest Blogger: Joe O'Farrell's "On The Search for HM Ships 'Erebus' and 'Terror'" 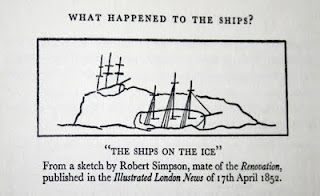 [Editor's note: Readers of this blog may recall my referring, among other theories as to the whereabouts of Franklin's ships, the work of Joe O'Farrell on the reports that the two ships had been seen, fast-frozen to an iceberg and abandoned, drifting off the coast of Newfoundland. I'm very grateful to Joe for being willing to share his carefully-researched account, originally delivered at the McClintock Winter School in Dundalk in January of 2008. On that occasion, unfortunately, other speakers went well over their allotted time, and as a result the paper had to be severely condensed. I offer here an excerpt from this remarkable presentation, as well as -- for the first time -- an accessible copy of the entire text. I'm certain that readers of Visions of the North will be excited and intrigued to hear of this remarkable and yet still little-known incident in the range of possible solutions to the Franklin mystery.]

"A very strange thing happened in May 1851. An item appeared in (of all places) the May 28th 1851 issue of The Limerick Chronicle, an Irish newspaper. Written by a John Supple Lynch of Limerick, to his uncle in England, it relates the story of his voyage on the “Renovation” from Limerick to Quebec, Canada, and, how, close to Newfoundland on or about April 20th of that year, his ship passed within a few miles of a big ice-flow upon which were stranded two ships. He said that the ships looked to have been abandoned, for, having studied them through the telescope, no sign of life or movement could be detected. Obviously a man reasonably acquainted with maritime affairs, he formed the opinion that they were consorts, and, surprisingly, expressed the view that they must be the missing Franklin ships. He added that the mate of his ship also observed the scene, but not the captain, for he was ill in his bunk below.

For two specific reasons, I find this letter quite fascinating.

Firstly, it shows the widespread knowledge of, and interest in, the Franklin Expedition of 1845. It‟s quite unbelievable that this man, who described himself to the subsequent Admiralty Enquiry as “an ordinary man”, should, in the Limerick of 1851, and as a post- famine emigrant to Canada to start a new life, even be aware of, or have any interest in, the goings-on of his colonial masters and in the Arctic to boot!

Secondly, it's very strange, but eminently understandable (bearing in mind the rather parochial circulation of a newspaper such as The Limerick Chronicle) that this matter did not come sooner to the attention of the Admiralty in London.

Indeed, it may never have come to any official attention were it not for the fact that the captain of the “Renovation”, on arrival in Quebec, and no doubt at the prompting of his passenger John Lynch, mentioned the episode to his fellow sea-faring colleagues, and, in this way, the matter eventually came to the attention of the Authorities in London. Further interest in the matter was generated by a letter which appeared in The (London) Times of May 8th 1852, almost a year after John Lynch's letter appeared in The Limerick Chronicle. It corroborated exactly what John Lynch's letter said."

Posted by Russell Potter at 8:41 AM