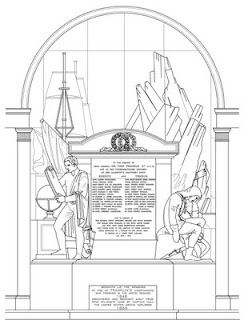 There are numerous memorials to Sir John Franklin around the world -- the best-known ones are at Westminster Abbey and in Waterloo Place, but there are statues in his birthplace of Spilsby, in Hobart, Tasmania, and even in Alaska. Yet perhaps the least-well-known memorial is also one of the most remarkable: the enormous wall-size marble sculpture at the Chapel of the old Royal Naval Hospital at Greenwich. For not only does it feature a lovely marble bas-relief of a ship and icebergs, but it incorporates into its base a sarcophagus containing the remains of one of Franklin's senior officers -- Lieutenant Henry Thomas Dundas Le Vesconte -- sent back to England after its recovery by Charles Francis Hall in 1869.

This makes Le Vesconte one of only two officers (the other being John Irving) whose mortal remains received a proper burial back home. In Le Vesconte's case, his tomb has been a restless one; originally installed in the Painted Hall, the memorial was moved, bones and all, to a location in a back stairwell of the Chapel. In 2009, it was moved to a far more prominent position in the Chapel's entryway. As a matter of fact, this very evening, I've been invited to attend a special event at the Chapel which celebrates the rededication of this monument, and the legacy of the officers and men of the Franklin expedition ... I can't say more for now, but promise to describe the proceedings, and include photos and more, in another post soon to follow!

Posted by Russell Potter at 3:48 AM