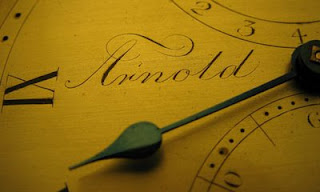 I just heard this morning from Jonathan Betts, who was most interested to learn of our discussion here, and offered some considerable additional background on the matter. I'll put his comments here in quotes:


1. "Erebus and Terror both took ten chronometers (don't have the source in front of me, but that much is known) and the receipt you refer to (ADL/D/18) is for nine chronometers supplied to Erebus from the Observatory on 10 May. Arnold 294 is not one of them, but that doesn't rule out the possibility of its either already being on Erebus, or joining them on the ship later."

2. "The chronometer ledgers are simply 'in and out' books for chronometers arriving and leaving the Observatory. If a chronometer left directly to a ship then we know where it went, but sometimes they were sent to naval bases (usually Portsmouth or Plymouth) and then we lose sight of where they went afterwards. The last entry for Arnold 294 on its ledger page before the "Lost..." entry, was it being sent with Commander Wickham on Beagle in June 1837. This was at a time when Beagle was being used as a kind of packet ship, usually delivering stuff to Portsmouth and Plymouth, so my guess is that Arnold 294 went to Portsmouth for issue to whichever ship needed it.

The chronometer in question is definitely Arnold 294, and that chronometer is stated in the Observatory ledgers as "Lost in the Arctic Regions with 'Erebus'."

3. "It is perfectly possible, as you said in your discussion, that this chronometer was issued to J.C.Ross on Erebus and that it was retained (or was supposed to be retained) for use on the following expedition, but got 'lost' during the refit at which point there was a cover-up of some kind. However the ships were said to have ten chronometers each and (as observed in your discussion) I cannot explain how the absence of Arnold 294 was not noticed at that point. Your correspondent Peter Carney postulates this scenario, stating that the officer whose responsibility it was... had a motive to maintain the fiction that it was still with the ship. But it would have required several officers to be complicit in such a crime which I find very difficult to imagine. Crozier was common to both expeditions and I suppose its possible he had agreed to transfer the chronometer and somehow it failed to make the transition for 'legitimate' reasons? Anyway, hopefully it will be possible to establish whether or not this chronometer was indeed with J.C.Ross & Crozier and then continue that line of conjecture if appropriate."

4. "A part of the "...Chronometer-box with its number, name of the maker..."etc., sounds like the Franklin relic we hold, which is from the chronometer by French, No.4214." (my comment: this corresponds with a note I found from Hall which implies that items specifically marked as state property were returned to the UK).

5. "Don't know who your contacts are that you refer to, but the NMM purchased the chronometer directly, but using funds kindly provided by the Friends of the NMM. The sale catalogue stated it had come from Franklin's expedition, not Ross's."

6. "The name the chronometer was given was Reynolds & Son, which may well not have been fictional as such a London firm was known in the mid-19th century, but it more 'convenient', as it meant only changing the first "Ar" and adding the rest, to provide the new name, which seems quite a coincidence for a legitimate company altering an object which is (whether they knew it or not) stolen property. I think in fact the conversion to carriage clock probably occurred around 1900 and was not part of any cover-up."

There's much to think on here -- I am deeply grateful to Mr. Betts for sharing this information with us.

So what more can we contribute? If anyone reading this has access to reliable information as to which chronometers went aboard "Erebus" with JC Ross, that would be one helpful point we might address.
Posted by Russell Potter at 3:18 PM