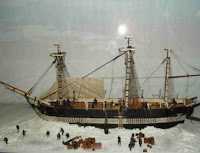 This latest news courtesy of the Globe and Mail:

Parks Canada says high-profile quest for 19th-century wrecks, lost in search for Northwest Passage, may be scuttled without support

The Canadian navy has turned down a request from Parks Canada to help search this summer for the Arctic's Holy Grail - the lost ships of the doomed 19th-century Franklin expedition.

Confidential government documents obtained by The Globe and Mail under access-to-information laws show that the federal agency asked the navy for support in the final two years of its high-profile, three-year quest to locate the missing ships.

She said the coast guard may not be heading to the area where the agency's archeologists want to conduct field work this year.

The missing ships, HMS Terror and HMS Erebus, were part of an 1845 British expedition led by Sir John Franklin that was trying to locate the fabled Northwest Passage to Asia.

The British navy vessels and their crews disappeared around 1848, and have become two of the world's most sought-after shipwrecks. Graves of some of the crew and wreckage from the expedition are all that have been recovered.

Major Doucette said the navy plans to have ships sailing in the Arctic this summer, but none as far west as O'Reilly Island, where Parks Canada has been concentrating its search. O'Reilly Island is in the central Arctic's Queen Maud Gulf.

In the past, the Canadian navy has been used to look for the lost British expedition, including in 1967, when dozens of soldiers were dispatched north to participate in a Canada centennial undertaking dubbed Project Franklin.

Major Doucette said it's too early to know whether the navy would be able to participate in the third and final year of Parks Canada's search, scheduled for 2010.

Posted by Russell Potter at 5:00 AM