All Well: Another note in a cairn 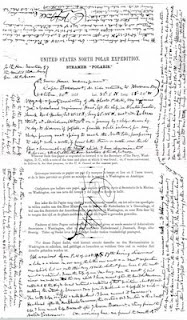 The American explorer Charles Francis Hall was a man with a born flair for publicity and the dramatic.  Long before he sailed north, he ran a newspaper, the Cincinnati Occasional, which he claimed was printed using a "Thermionic Engine" -- a machine which produced more power than it consumed.  Needless to say, the claim was false, but it had just the sort of style about it that sold more newspapers.

In the 1860's, Hall had managed two substantial Arctic search expeditions on little more than a shoestring, hitching rides with friendly whalers and relying on his Inuit guides, "Joe" Ebierbing and "Hannah" Tookoolito, to provide hunting and translation services as he sought after survivors of the Franklin expedition.  In the end, he did not find any, although he amassed a large body of oral testimony, and it was with these journeys "under his belt," so to speak, that he lobbied the US Congress and President Ulysses S. Grant for funds to launch his planned attempt on the North Pole.  In the end, despite long odds, he prevailed, and was appointed commander of an expedition which sailed aboard the USS "Polaris" in June of 1871.  Hall had considerable control over many aspects of the planning of the expedition, although not -- unfortunately, as fate would have it -- the appointment of its scientific personnel.  Filled with the romance of the North even after many years of bitter experience, he designed forms to be thrown overboard and/or left in cairns, and based them very directly on the famous "Victory Point" record left behind by Franklin's officers.  Hall's one major change, besides directing the finder to send word to the US Secretary of the Navy rather than the UK's Admiralty, was to make the form nearly twice as large.  Even then, as the example shown here indicates, he found the space barely adequate for his needs, filling every margin with his characteristic close-written hand, then adding a bold signature across the very middle of the sheet.

The form here is a copy of one said to have been deposited by Hall at the far reach of his first sledging expedition after the Polaris was secured at the place he named "Thank God Harbor."  Curiously, it too was placed inside a copper cylinder, and there it still resides, carried back from the wreck of the expedition and deposited with the rest of the Hall Papers at the Smithsonian Museum of American History.

The message opens with the traditional statement of accomplishments:

Myself and party, consisting of Mr. Chester, first  mate, my Esquimaux Joe, and Greenland Esquimaux Hans, left the ship in winter quarters, Thank-God Harbor, latitude 81° 38' north, longitude 61° 44' west, at meridian of October 10th, on a journey by two sledges, drawn by fourteen dogs, to discover, if possible, a feasible route inland for my sledge-journey next spring to reach the North Pole, purposing to adopt such a route, if found, better than a route over the old floes and hummocks of the strait which I have denominated Robeson's Strait, after the honorable Secretary of the United States Navy.
Further details as to discoveries, named lands, flora and fauna ("the country abounds with life, and seals, game, geese, ducks, musk-cattle, rabbits, wolves, foxes, bears, partridges, lemmings, &c. &c.") follow, and then this curious final statement:

Up to the time I and my party left the ship all have been well, and continue with high hopes of accomplishing our great mission.

It's hard to imagine that Hall, for whom Franklin and his men loomed so large, would have been unaware of the potential irony of using a phrase so reminiscent of the Victory Point record's fateful "All Well" -- and yet he chose those words.  The irony would be provided later, just as it had been for Franklin, when Hall ended up poisoned by a member of his own crew; on November 8th, scarcely three weeks after depositing this note, he would be dead.  The prime candidate for his poisoner remains Dr. Emil Bessels, a member of the largely German scientific staff appointed by the Smithsonian over Hall's objections, who apparently resented the leadership of a man they considered lesser than themselves.  It's still sadder to reflect that, given the success of his initial sledge-journey north, Hall might well -- had he lived -- have come far closer to the Pole than any other explorer in the nineteenth century.
Posted by Russell Potter at 5:29 PM