Maps of the Canadian Arctic -- free! 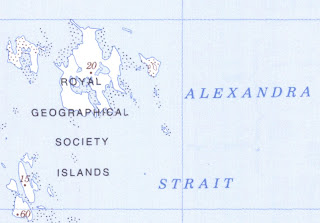 Over the years I've written about and researched the Franklin expedition, among the toughest things to track down have been maps.  Historical maps, understandably, are the most difficult, and often require arrangements with rare book libraries, dealers, and others who have access to the originals.  But simply obtaining an accurate map, say, of King William Island -- accurate enough to plot the locations of Franklin finds, and make meaningful measurements of distances -- has always been a bit tricky.  In the old days, you could order maps directly from the Canada Map Office; a few years ago, they stopped providing them, and one had to order maps from dealers in Canada.  Then, most recently, these dealers themselves have begun to run out of stock, as the original print run of the maps was exhausted, with no plans to print more.

It was a frustrating situation -- that is, until recently, when I learned of Canada's GeoGratis map service.  In the past, this service only provided mapping data for high-end software unavailable at the consumer level, but it is now possible to download a high-resolution TIFF of any original topographical map.  The interface is a rather confusing one, and it's easy to be disappointed if you try searching for geographical features.  However, if you simply go directly to the topographical map key, known as the CanMatrix, you can move, zoom, and finally click on any map in the entire grid.  A few menus and a download of about 30 MB later, you'll be unzipping yourself a full, 55-60 MB topographic map, which you can zoom in on, edit, and use to your heart's content.  The small sample above, which shows the Royal Geographical Society Islands -- one site of the current search by Parks Canada,  is from map 67d, "Cape Felix," a stunning 1:250,000 scale topo map with a remarkable level of detail. What's more, there's a surprisingly open-ended license for these materials, which apparently allows all kinds of use, including the making of derivative products.  It's one of the most generous licenses for official governmental maps of which I'm aware.

So drop on by -- you will be amazed by the level of detail that's available!  It's a Franklin-ophile's cartographic dream come true.

Note on map above: © Department of Natural Resources Canada. All rights reserved
Posted by Russell Potter at 3:40 PM