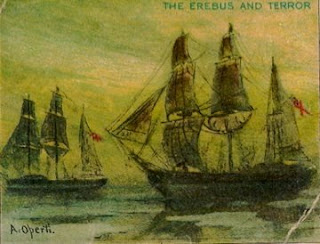 Here's a Franklin search update, courtesy of the Globe and Mail:

As Parks Canada prepares to resume its search in the Arctic later this year for the lost ships of the doomed 19th-century Franklin expedition, it's decided to call in the big guns - the Canadian military - for extra help. According to confidential government documents obtained by The Globe and Mail under access-to-information laws, the federal agency has asked the Canadian navy for support in its high-profile, three-year quest to locate what's been dubbed the Arctic's Holy Grail.

The missing ships, HMS Terror and HMS Erebus, were part of an 1845 British expedition led by Sir John Franklin to locate the fabled Northwest Passage to Asia. The vessels and their crews disappeared around 1848, and since then several search efforts have been launched to solve the maritime mystery. Only graves of some of the crew and wreckage from the expedition have been found.

Parks Canada is determined to locate the biggest prize: the long-lost Royal Navy ships. According to internal documents, it has pinpointed Wilmot and Crampton Bay and waters near O'Reilly Island as key places to look. Both spots are in Queen Maud Gulf, which is southwest of King Edward Island.

During last summer's six-week search, the start of the ambitious three-year project, only small artifacts, including tent rings and pieces of copper hull sheathing, believed to have belonged to either the Terror or Erebus, were collected.

While the federal agency is already receiving assistance from the Canadian Coast Guard, government officials would like another ship to help with the search effort for two of the world's most sought-after shipwrecks.

Documents reveal that the coast guard's icebreaker Sir Wilfrid Laurier was only available to help for two out of the six weeks set aside last summer.

Alan Latourelle, Parks Canada's chief executive officer, has written to the military and said the ships' discovery would be met with "substantial media coverage."
He added that the navy's participation in the project could be tied to Parks Canada's centennial in 2011.

"Playing a part in bringing the fate of the lost Franklin expedition to light would represent a singular opportunity to commemorate the significant milestone for the Canadian Navy in landmark fashion," Mr. Latourelle wrote in a letter to Rear Admiral Paul Madison.
Lieutenant Len Hickey, a navy spokesman based in Halifax, said he couldn't comment on the status of Parks Canada's request until next week at the earliest because "the parties involved" weren't available.

If the navy agrees to help, it wouldn't be the first time Canadian military resources were used to search for the remains of the ill-fated Franklin expedition. In 1967, dozens of soldiers were dispatched to the Arctic to participate in a Canada centennial project dubbed "Project Franklin."

The soldiers conducted air, land and sea searches, including sending divers down into the frigid waters surrounding O'Reilly Island. While some relics from the Franklin expedition were found, the search turned up little.

According to internal Parks Canada communications plans, officials are being instructed that this latest search, which is expected to cost the agency at least $225,000, shouldn't be "over-hyped" because of the possibility the wrecks won't be found.

However, one plan says that if the ships are located, it would be a potential media opportunity for a "high-profile" federal official, "perhaps even the Prime Minister."
Posted by Russell Potter at 9:10 AM