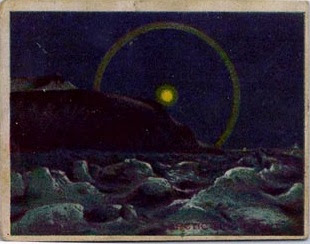 Albert Operti (1852-1927) was renowned in his day for his depictions of the natural wonders of the Arctic, as well as scenes of exploration and ships. Born in Italy and educated in Britain, he accompanied Robert Peary on his 1896 expedition to Greenland, a trip which resulted in hundreds of sketches and studies which would be the basis for his later work.  Many of his paintings were commissioned by, and remain in the collection of, the Explorers' Club in New York, but are not widely known in the art world.  Yet although much of his work was based on direct observation, many of his most dramatic paintings imagine scenes of terror at which Operti was not in fact present; among these, his "The Rescue of the Greely Party" is especially evocative.  He also painted scenes from the Franklin search era, including one of the "Erebus" and "Terror" under sail, and the abandonment of the "Advance" on Kane's Second Grinnell expedition.  In addition to his paintings and sketches, he was also commissioned to make plaster casts of Greenlanders for the Museum of Natural History.

Like many panorama and diorama painters of the nineteenth century, when the Arctic was also a popular subject for such entertainments, Operti had a background in theatrical scene painting, and it was with this work that he was chiefly occupied in the middle years of his life, principally with the Metropolitan Opera.  In the last six years of his life he returned to the ANMH, painting diorama backdrops, murals, and friezes for their exhibitions.  During this period, he actually lived in quarters provided by the Explorers Club, and it was there that he died in 1927.

Outside of the extensive collections there, however, Operti's work is not often seen or exhibited.  And yet, curiously, contemporary prints of some of his finest paintings can be had for a very modest sum at sites such as eBay -- thanks to the series of scenes he prepared for trading cards issues by the Hassan Oriental Cigarette Company in the early nineteen-teens.  An example -- "Arctic Moonlight" -- is shown above, and further examples from my own collection may be found here.  The most I've ever paid for one of these cards is $10, and at times I've been able to acquire small sets for around $20.  It's a fascinating way to acquire some remarkable images of the Arctic from the early twentieth century.
Posted by Russell Potter at 6:03 AM