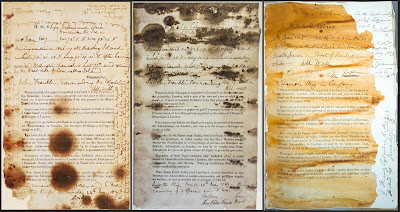 Nearly everyone who develops an interest in the lost Franklin expedition comes -- sooner rather than later -- upon the famed "Victory Point" record. In the contrast between its bold and confident original message and the second, sorrowful one in its margins, it's the most potent encapsulation I know of the whole tragedy that befell Franklin and his men, and has been studied for years in search of any additional clues that might be preserved in its peripheries.

But it's not as well known that that a second record, minus any marginal message, was deposited by the same sledging expedition that left the first. It was found by Lieutenant Hobson at a cairn only eight miles south of that at Victory point, surely less than a day's hauling, suggesting that Gore and his party must have had a practice of leaving a message in a cairn at each prominent headland. The area where the second record was left is now known as Gore Point; doubtless there were many others which are now lost.

But there is yet another record -- one fewer still have seen.  This third record (actually the first, in order of which they were deposited) was mentioned by Richard J. Cyriax in several of his papers, but never reproduced. My friend and fellow Franklinite, Gina Koellner, found a xeroxed copy among Cyriax's papers at the National Maritime Museum. Happily, the xerox included the index number for the original at the National Archives at Kew, and that's where Gina found it, glued down to a sheet of paper that was bound into a larger volume; you can see the stitch-marks on the binding at the left. Just recently, another far-faring Franklinite, Logan Zachary, re-visited Kew to take high-resolution photos, and that's the occasion for this post.

Now, for the first time, we can see the third record in all its glory. Perhaps the most notable feature is Sir John Franklin's bold signature -- clearly, it had been usual practice for him to sign these forms personally, which makes it seem the more likely that the later records -- where his second, James Fitzjames had simply written "Sir John Franklin commanding" -- are a sign of Franklin's illness or incapacity. The other information shows that Erebus and Terror were still accompanied by the "Baretto Junior, Transport," and their latitude and longitude show them off the coast of Greenland near Simiutaq, an uninhabited island about 150 miles NNW of Nuuk. The original also adds, "with a Danish Brig in company."

Franklin's instructions were to toss these messages -- in their cylinders and suspended inside a barrel -- overboard periodically so as to help ascertain the direction of the currents. In this case, they must have tended north, as the notation at the side shows the message was recovered near Imerissoq -- Franklin's "Whalefish Islands"-- nearly two hundred miles up the coast, in July of 1849 -- more than four years later. Alas, aside from the currents, the message doesn't add very much to our overall knowledge of the early days of the expedition, but the presence of Franklin's signature -- clear as day -- does add force to the suggestion, first made by William Battersby, that the illness that took Franklin's life on June 11, 1847 must have already taken a significant toll before Gore and company departed the ships on the 28th of May.
Posted by Russell Potter at 12:18 PM