The "Other" Franklin Record 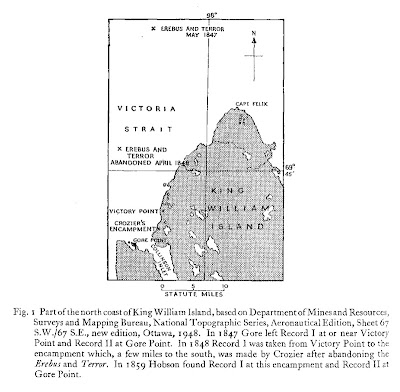 The original Franklin record left near "Victory Point" on King William Island in 1848 is quite well-known, and has been discussed at length here and elsewhere. Far less common is any mention at all of the other official Admiralty form, very similar in every respect (save the fateful addendum in the margins) to its brother. Both records were filled out by James Fitzjames aboard HMS Erebus, and both repeated the same mistakes (the longitude given for Beechey Island is too far to the east by several miles, and the year of the ships' wintering there is misstated as 1846-47 rather than 1845-46). The other record was recovered at what became known as "Gore Point," the tip of the peninsula that forms the western side of Collinson Inlet. The location is consistent with the idea of Gore and Des Voeux having commanded a party sent out to survey the western coast of King William Island, with the presumed goal of reaching Simpson's cairn on the shores of Washington Bay; such a party would have skirted the coast, taking advantage of the still land-fast new ice for smooth travel. On the Gore Point record, the only significant difference is that the phrase "All Well" was not underlined.

So, at first glance, this second record adds little to our understanding. And yet, having been deposited just 8 miles -- possibly one day's march -- south of the VP record, it strongly suggests that Gore had been instructed to leave a record frequently, perhaps daily, on his southward trek. One might reasonably expect, then, several other such records were left along the coast, and might yet be recovered. The most important of these, of course, would have been at Simpson's cairn, but since by the time McClintock reached it, it had been opened, this record will probably never be recovered (the attractive part of it, from the Inuit point of view, would have been the metal cylinder, which could be re-purposed for all manner of useful things). But would certainly be worth looking for the others -- a surviving record would be far more significant than, say, a toothbrush.

It is tantalizing to think of Gore's possible achievement of the long-sought dream of linking the eastern and western surveys of the Northwest Passage -- it seems hard to imagine he would have missed his goal. We know that he returned alive to the ships, as his promotion to Commander must surely have taken place on the death of Franklin, at which time Fitzjames would have been acting Captain of the Erebus, and Gore presumably promoted to acting Commander. The idea that he would have been promoted for finding Simpson's cairn, however, has less to recommend it; such field promotions were exceedingly rare in the Navy outside of battle situations.  And, alas, since Firzjames refers to him in the VP record as the "late" Commander Gore, he must have died at some point between his return to the ships and the depositing of the 1848 record.

So was a Passage then undiscovered? Not necessarily, since as they passed along their weary and ultimately fatal retreat, Franklin's men encountered the Inuit at Washington Bay, and the presence of human remains further along the southward-tending and southern coast indicates that they must all have reached and passed the location of Simpson's cairn. In so doing, they indeed 'forged the last link with their lives.'

Posted by Russell Potter at 7:34 AM