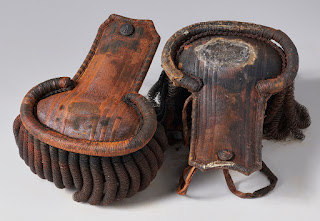 They sit upon the shoulders in their portraits -- Daguerreotypes taken in May of 1845 -- Franklin and his men, their ghostly images a core part of what made them such a "gallant" crew -- and here is a pair of them, taken from the cabin assigned to Lieutenant James Fairholme aboard HMS "Erebus," 175 years afterwards.

It's quite a moment. For, while a goodly number of the relics recovered by Rae, McClintock, Hall, and Schwatka could be readily associated with their owners, these are the very first items I can think of recovered during the modern archaeological work by the divers of Parks Canada's underwater archaeology team that can be fairly definitively associated with a single individual. 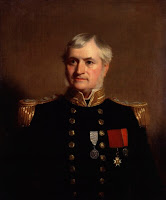 Epaulets -- or epaulettes if one prefers -- have featured in the Franklin story before. Captain Henry Kellett of HMS "Resolute" left his behind when he (very reluctantly, and only under direct orders) abandoned his ship. Against all odds, they were returned to him, brightly polished and still in their case, when the Resolute was returned to Britain in 1854; you can see him wearing them in a portrait painted the following year. Lieutenant Fairholme, alas, is long gone, and can know nothing of this remarkable discovery, though I'm sure it's quite significant to his living family members in Canada and around the world.

More astonishingly still, these are but one of 350 artifacts announced today as the results of Parks Canada's dives in 2019. It was a gloriously long and productive season, and -- despite some rough weather near the end -- has set new benchmark for both the quantity and quality of artifacts recovered. We have seen only a small smattering so far -- a platter, some plates, a pencil case, and a few other items -- mostly from Franklin's steward Edmund Hoare's closet -- but clearly, there are many more to come. Many of them were unveiled in an event today in Ottawa at Parks Canada's conservation center, attended by senior government ministers along with Pam Gross, the head of the Inuit Heritage Trust, along with Stanley Anablak, president of the Kitikmeot Inuit Association. One of the key notes struck was that of continued co-operation and co-curation of all artifacts with Inuit, a crucial element which both underlies and augurs well for these extraordinary finds, and many more to come.

And the story is larger still -- for, even in the most seemingly minor details of each item, many stories more than one remain to be told. A good example is the epaulettes themselves -- for, although found in Fairholme's cabin, they are certainly not the ones which he was photographed wearing in 1845. Why not? Because, as he confessed in a letter home to his father,


“I hope Elizabeth got my photograph. Lady Franklin said she thought it made me look too old, but as I had Fitzjames’ coat on at the time, to save myself the trouble of getting my own, you will perceive that I am a Commander! and have anchors on the epaulettes so it will do capitally when that really is the case.”

Commander Fitzjames's coat -- and its epaulettes -- remain to be found. But this fascinating item never the less tells us of something far more personal than any other artifact yet recovered. It is just a touch, lightly upon the shoulder, to remind us of those who have gone on.

Posted by Russell Potter at 5:39 PM