The grave at Comfortless Cove 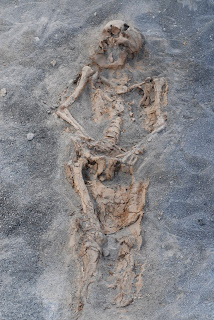 Those who know the story of the infamous "Peglar Papers" -- those enigmatic documents discovered in a leather wallet in the coat pocket of the corpse of one of Franklin's men -- will recognize at once the phrase "the grave at Comfort Cove" (well, since the papers were mostly written backwards, it was actually "Eht evarg ta Trofmoc Evoc"). This is an apparent reference to some place in the Arctic, though it took its name from a place on Ascension Island, and it's also possible that it referred to that site. For many years, Ascension -- due to its remoteness -- had been used as a harbor for quarantined ships and men; those who died during these quarantines were buried on shore there. The name, appropriately enough, has since shifted to Comfortless Cove, and the graves there remain almost entirely undisturbed.

Just recently, though, I received an e-mail from Dr. Karl Harrison who had participated in an archaeological dig there in 2008 under the overall direction of Dr. Carl Watling and the RAF. The dig focused on a group of five cairn-like structures just north of Comfortless Cove at a site known as Pyramid Point, excavating one of them. What they found was a somber sight -- a male skeleton of relatively short stature, wrapped in a fabric wound about with twine. There were no other material artifacts, and no marker of any kind, but given the period of use of this area, the remains were very roughly dated to circa 1828.

If, indeed, the writer of the "Peglar" papers was thinking back to the burial of a shipmate, it's entirely possible that this was he -- or else, he lies nearby, quite possibly buried in a similar manner. And it's the manner of burial that strikes another chord -- for just so, the body presumed to be that of Lieutenant John Irving, discovered in 1880 by the Schwatka search expedition, was found wrapped in canvas; in William Gilder's words, "there was also a large quantity of canvas in and around the grave, with coarse stitching through it and the cloth, as  though the body had been incased for burial at sea.” A fragment of this same canvas -- stamped with the words "NAVY SAIL CANVAS" -- is still in the collections of the National Maritime Museum in Greenwich. In both cases, it seeems, these seamen were buried in a kind of hybrid manner -- wrapped in sailcloth, or a hammock, as though destined for the sea, but then laid upon land, and stone upon stone thereafter.

It's suggestive of the likelihood that, at the time of Irving's death, one or both of Franklin's ships must have been nearby -- after all, men hauling sledges -- some of which, according to Inuit testimony, were assisted with sails -- would have had no canvas to spare. And it's a reminder that the Arctic is far from the only place with lonely cairns of stone.

With deepest thanks to Dr. Harrison for sharing this remarkable find.
Posted by Russell Potter at 1:54 PM