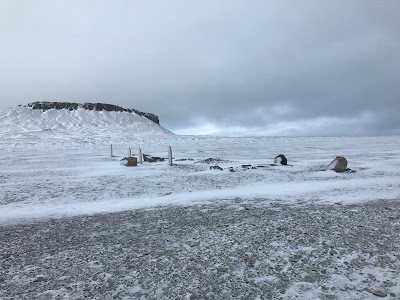 The Franklin expedition graves on Beechey Island are probably one of the best-known and most often visited sites in the Canadian Arctic, and have been a place of pilgrimage almost since their first discovery -- made by a detachment of men from William Penney's search expedition in 1850. The graves of their three most famous occupants -- John Torrington, William Braine, and John Hartnell -- were opened in the 1980's, and a forensic examination of their remains made by the anthropologist Owen Beatte -- during which time photos of the men's faces made headlines around the world, and were the subject of his and John Geiger's groundbreaking book, Frozen in Time.

But what's far less well-known about the Beechey graves is that there's still a measure of uncertainty about which is which. I've guided expedition cruise passengers there for years, and the first question I'm inevitably asked is, what's with that first seeming burial mound -- closest to the shore -- without a marker? The traditional answer has been that this was the site of a memorial to Joseph René Bellot, which was shaped in the manner of a wooden headboard. This headboard, along with all the others, was removed in the 1970's by the NWT government, and taken to the Prince of Wales Northern Heritage Centre for conservation and storage. Resin replicas replaced them, but these did not last well; treated wooden boards with bronze plaques replaced those -- and these are the markers we see today. It was decided at that time not to replace Bellot's marker, since that would confuse visitors by making them think he was buried there, rather than lost in the sea-ice some miles distant. And yet, to this day, other sources of confusion persist.

To begin with, there are not three graves but four -- the fourth had was added early on, as Thomas Morgan, late of HMS Investigator, died on his way home while aboard HMS North Star -- this has been assumed to be the grave furthest from the beach, and the replica headboard is there. Then, due to a mixup when the replacements were installed, Braine's and Hartnell's markers were reversed, adding to the work needed to properly interpret the grave sites. And now, thanks to a recent study of the original markers by Todd Hansen, it seems there may be a further issue: the wooden door originally thought to have been the Bellot marker is not nearly as tall as the other markers; it seems unlikely to have been large enough to contain the lengthy tribute -- 17 lines -- it was said to bear, while a taller, rounded "tablet" marker" seems more likely to have been his. But if that's the case, the taller marker -- which originally adorned the furthest grave -- suggests that that it -- not the first one -- was the site of the Bellot marker, and that the closest grave may actually be a grave, with Morgan at rest beneath its stony mound. Corroborating this, no such substantial mound is to be seen behind the present-day Morgan marker.

Hansen's inference seems to me a sound one -- but it's complicated by the fact that neither panel has any surviving writing legible upon it. It's possible that the inscription for Bellot was stamped into lead tablets, similar to those that originally hung on the pillar next to Northumberland House; since the "tablet" marker is extremely worn down, it's also possible that the wood containing painted letters simply wore away. All the markers, now part of the Archives of Nunavut, are presently in temporary storage outside Ottawa at a facility operated by the Canadian Museum of Nature; one can hope that, when the time comes for them to be sent to a permanent home in Nunavut, further study can be conducted using modern, non-destructive techniques.
Posted by Russell Potter at 9:41 AM