Earliest photos of graves at Beechey

In the quest to understand the history of the graves of Franklin's men at Beechey Island, and more particularly that of the markers themselves, I've had occasion to track down the earliest known photographs, which are seldom seen today. With the invaluable help of my friend Doug Wamsley, I've been able to see two of the very earliest: that taken during Sir Allen Young's "Pandora" expedition in 1876 (above), as well as an earlier, though much faded, image made in 1858 by Dr. David Walker, who was then aboard Sir Francis Leopold McClintock's yacht the "Fox" (below). These two photos give us invaluable evidence as to the early state of these graves and their markers, and may help clarify the situation today, when some of the replica markers are likely to have been inaccurately placed.

One of the more confusing features of these graves is that they seem to have had markers or stones at the foot of the graves, as well as headboards. The gives the leftmost grave in the Young image of being two graves, until one sees the burial mound that connects them; the same applies to the middle grave. In the grave mound closest to the shore (the rightmost), the foot marker is obscured, I think, by its neighbor's headboard. Lastly, at the far right, one can see a tall, rounded white board unlike the others in scale and shape -- this is almost certainly the one made from a repurposed door, which Todd Hansen believes was most likely that of Thomas Morgan. There is one further headboard visible at the far left, which, if Hansen's conjecture is correct, must be the cenotaph erected in memory of Bellot.

With Dr. Walker's image, which has faded considerably, we're on somewhat firmer ground: the perspective is head-on, with only the headboards visible. By turning up the contrast, as I've done here, we can see four clear markers, as well as a dark area at the far right which may be in imperfect image of the marker closest to the shore (or that marker may have fallen).  From this angle, one can see that the furthest shoreward marker is set apart from the others by a greater distance, which again seems consistent with its being Bellot's; in neither image is any grave-mound seen in its vicinity. 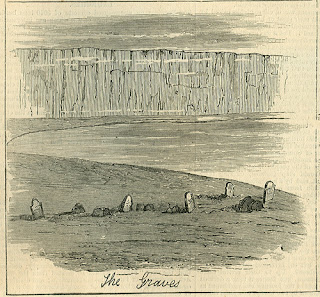 There is one last image, which may well have been based upon Young's; this was an engraved vignette in the Illustrated London News article about his voyage. The engraver here has helpfully separated out the headboards by showing them in lighter colors, with the mounds and foot-markers much more darkly shaded. This version also seems to show a cross-piece on the rightmost marker, clear evidence that it must be the modified door, as this was the only marker to have that feature.

So what does this all mean? Well, we can judge something by the shapes: the innermost marker, has the same squared-off rounded shape, which corresponds with Torrington's marker (the second to outermost) as well as the large "tablet" marker Hansen believes was Bellot's. Hartnell's similarly-shaped but far shorter headboard seems to come next from the left, though it's similar enough to Braine's that it's hard to say precisely; it's perhaps no wonder that the NWT staff charged with inserting the replica markers got these reversed.

These features correspond with Walker's and Young's photos -- and Young's adds one further, striking detail: just as described by Miertsching and Robert Goodsir, the three Franklin graves appear to be quite black, while both the "tablet" and "door" markers are brightly white.
Posted by Russell Potter at 10:12 AM