First sight of the graves at Beechey 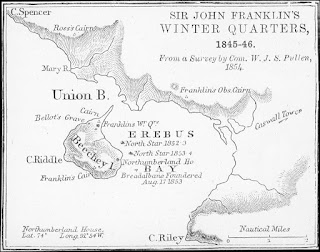 We often hear about the first discovery of the graves of Franklin's men at Beechey Island -- but not, before now, have we had a vivid a first-hand description of the event. Thanks to the discovery of an 1880 newspaper article by Alison Freebairn, we now have a reminiscence by none other than Robert Anstruther Goodsir, brother of Harry, who by his own account was the first to reach the graves originally sighted by Carl Petersen. It's such a fascinating, gripping account that I'm going to give it almost in its entirety. In my next post, I'll give the rest of his account, which has elements in it that suggest that his memory was not quite as "undimmed" as it seemed, but never the less there's no question that he still recalled -- and felt -- the events with extraordinary vividness some thirty years after the events.

It is to the day on which we discovered the first traces of the ill-fated ships and their crews––ere yet we had come to talk of " relics," ere yet the least sanguine had lost hope. And albeit it is but an old tale re-told, I can tell it with undimmed memory, for as I put down the paper I have just been reading, and with closed eyes sadly allow each clearly cut outline, each unblurred detail to display itself to my mental vision, I forget that I have to bridge over 30 years and three months to do so; I forget that most of the eager faces I see so plainly about me have long been dust; I forget that nearly all of the well known voices I hear so distinctly have long been stilled in the grave.

I write now of what I saw, and what I did and felt on that day with as little stretch of memory as when I sat down the same evening to enter it all in my journal. Much writing in journals and filling-in of log-books was done that night. There are but few who may read these lines that can recollect or realise the intense interest with which everything connected with the name of Franklin at that time excited. Five years and six months had then elapsed since they had sailed from Greenhithe on the 15th of May, 1845. Alas six times five years have now run into the past, and still all we hear of is––relics. Sir John Ross that night, in his close little cabin in the Felix, recorded many marvellous things. Kane, in the Advance, was inditing all that his bright, observant eye had seen. Sherard Osborne that night must have filled sundry folios of that huge, ponderous bank-ledger-looking tome––an awe-inspiring volume it was, which used to make us wonder at the man who could have the courage to contemplate the idea of ever living to cover its wide-spreading pages with closely, neatly written MS.

The day previous to that of our memorable landing at Beechey Island (which had been appointed a place of rendezvous by the different commanders), we had crossed the mouth of Wellington Channel and stood some ten miles to the westward. Here Captain Penny, of the Lady Franklin brig, examined a bay with the view of making it his winter quarters. Captain Ommany had also before this examined the bay with the same view, and named it Assistance Harbour, though, as it turned out, only Penny's two brigs and Sir John Ross's little Felix ultimately wintered in this place. Here a party, of which I was one, was landed to examine the coast thence to Cape Hotham, on the western side of the mouth of Wellington Channel, whilst the vessels put about and ran back under easy sail to Beechy Island, where theymade fast for the night to the "land ice."

During our walk that day, and close examination of the beach, we found various undoubted proofs that parties from the Erebus and Terror had been here before us, but still nothing of any importance. At one place, which I recollect looked as if it had been camped at for some time, I picked up a nondescript sort of apparatus made of hoop iron, something between a long grappling iron and a naturalist's dredge. Many conjectures were formed at the time as to what this had been need for. During the whole day's march a bright look-out was kept for cairns, which we expected to find papers left by the Erebus and Terror, but we did not fall across anything of the kind.

We returned on board that night in a hopeful mood, for, although we found nothing of importance, yet we knew that we had struck the trail, that the scent was strong, and that we were in a fair way of soon gaining more explicit tidings of the lost voyagers. I was the first to start early next morning for the shore, accompanied by John Stuart (the late Dr. John Stuart, of Sandhurst), Petersen, the Esquimaux interpreter, and Alexander Thompson, a seaman. Proceeding across the land ice, we could see on our right front to the eastward the precipitous limestone cliffs and the flat table-top of Beechey Island ; to the left, and stretching westward, the long, gradually sloping and descending gravel spit nearly reaching the opposite cliffs, which there trending northwards, rounded into Wellington Channel.

Our little party made for the lowest orwestern end of the spit. Where we struck it, it rose rather abruptly from the ice, about 10ft, but before we had put foot upon the shingle the quick eye of Petersen had seen something, and his shrill cry in broken English of "Caneesterres! Caneesterres !" made our hearts beat faster with the knowledge that the scent was again breast high. I can hear Petersen's cry, and his next more stirring exclamation ringing in my ear at this moment. Quickly breasting the loose and shifting shingle, we saw before us a neatly-built pyramidal cairn of canisters or meat tins, about 9 ft high, a little broken at the corners by the bears or from other causes, but still evidently carefully constructed ...

Our excitement was at fever beat, for scarce a second elapsed between Petersen's first exclamation and his next more startling cry of " Mans! mans!" his Scandinavian features all aglow, and his blue eyes almost starting from their sockets. Almost at the instant of his utterance I had descried three dark objects about a mile off, where the spit merged into the talus at the foot of the cliffs of the northern sideof Beechey Island. God! Can I ever forget the strange feelings of that half-hour of half hope-the deep excitement with which I started off at headlong speed towards these dark objects, all too willing to be cheated by the thought that the Dane's vision was quicker than mine, and that they were, indeed, men? I recollect dashing down my gun ere I had gone many yards; I recollect tearing madly at the strap of my telescope (a rare Dollond, the gift of ever good and kind Lady Franklin), and of recklessly casting it on the stones. Ammunition belts and pouches were cast aside. I recollect slackening pace for a second or two to get rid of my heavy pea coat and sealskin cap until I could speed more freely along, with the panting Petersen well behind, whose wind had not been improved by years of semi-Esquimaux habits. I recollect noting as I sped along the thousand articles with which the beach was bestrewn, pieces of rope, fragments of timber, scraps of iron, but I did not pause, though I remember me well of gasping out to myself the word 'wrecked.' I recollect that soon after starting I became satisfied that the objects towards which we were so anxiously pressing could not be men.

I recollect that my next idea was that they were huts, and deluding myself into the fond fancy that a filmy smoke rose from one or all of them. I recollect how soon this idea also proved a mockery, and that as I quickly, stride by stride, drew closer and still closer to the dark objects, the ghastly truth dawned upon me that it was their graves that I at last stood beside. Three heavy slabs of wood shaped like humble headstones, painted black, their backs to me, and on the other side the low, oblong-rounded mounds, under neath which three at least of those we were in search of were peacefully lying.

How well do I remember the pause I made, when the still, quiet desolation of all around me was unbroken, save by the quickly-advancing steps of Petersen crunching over the gravel, the loud beating of my heart and quick-drawn breathing, ere I could gather courage to advance and read the inscriptions that I rightly guessed would appear on the other side of the headboards. I dreaded seeing the name of one near and dear to me who had sailed in the Erebus. After the names, my next glance was at the dates: from these I could judge that in this bay the Erebus and Terror had lain during the winter of 1845-6.
Posted by Russell Potter at 1:59 PM