Utensils and the Franklin search 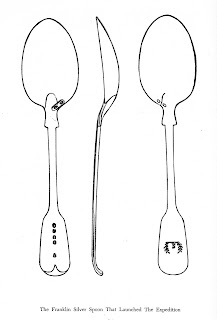 Sometimes, the humblest objects of daily use tell a tale more eloquent, more rich and complex, than anything we could gain from written records. Such is certainly the case with the material relics of the Franklin expedition. Setting aside those with greatest seeming significance -- Franklin's Hanoverian badge, the infamous dipping needle, or Des Voeux's shirtsleeve -- some of the most common items recovered have the greatest potential meaning for those attempting to reconstruct the last months of the Franklin expedition. I refer, of course to utensils -- forks, spoons, and the occasional knife -- which were recovered by many early Franklin searchers from Rae to Schwatka -- and which, even today, have not yet been systematically examined for what they can tell.

The utensils, most of them quality silver plate, were initially recognized on account of the family crests on their handles, which showed them to be from the families of officers such as Franklin and Crozier. Franklin's distinctive crest -- a conger eel's head between two sprigs -- was the most commonly found, suggesting that his plate had been first and widely distributed among the sailors; perhaps the most poignant of the crests was that of Fairholme -- a dove with an olive branch and the motto "Spero meliora" -- I hope for better things.

And yet there's more: on the stems and undersides of these same spoons and forks, there are found the scratched initials of other men, most of them ordinary seamen. The only explanation seems to be that, prior to the abandonment of the "Erebus" and "Terror," the silverware of the officers of both ships was distributed to the men for their use. In some cases, as with Franklin's, this was because the officer in question was deceased -- but the principal reason, doubtless, was to preserve the silver plate without burdening any one party with too large a quantity. And, since the silver plate from the officers from each ship was distributed to sailors aboard the same vessel, the discovery of a fork or a spoon -- provided its provenance can be definitely settled -- may give us a very likely indication of the path of the crew of that ship.

The pattern seems suggestive -- for instance, nearly all of the utensils recovered by McClintock at Cape Norton on the eastern side of King William Island were connected with the "Terror" -- there were two Franklin spoons marked "WW" (William Wentzall, seaman) and WG (William Gibson, steward), both of the "Terror," along with a Crozier fork and a teaspoon of Alexander McDonald, assistant surgeon. Only one item -- a Fairholme teaspoon -- was associated with the "Erebus." Now that we know that the "Erebus" was piloted to a point much further south in Wilmott and Crampton Bay, that would seem to explain the paucity of silverware from her officers -- and so, might the frequency of "Terror" forks and spoons then suggest its having sunk nearby? If so, this would certainly fit in with L.T. Burwash's theory that a Franklin ship sank in the vicinity.

When McClintock visited a party of Netsilingmiut near the North Magnetic Pole, which would have been near the next general transit of such a journey, he obtained mostly utensils from the "Erebus," although a lone McDonald fork was among them; this would now seem to suggest that perhaps a party from that vessel passed through this area. But of course, utensils could very well have been obtained through trade with other Inuit. What then, of spoons or forks with a clearer provenance? Alas, even when we have a utensil handed in by someone who claimed to have originally found it, the evidence is very mixed. The famous spoon offered to Schwatka (see above), complete with the Franklin crest and a distinctive mending job where the cracked bowl had been repaired with copper, is one such example; the giver, one Nu-tar-ge-ark, could offer only a clouded account:


He said it was given to him by some of his tribe, and that it had come from one of the boat places, or where skeletons had been found on King William Land or Adelaide Peninsula, he could not remember exactly where.

(see the "Schwatka" chapter of my Finding Franklin for a fuller account of this spoon).

Since the vast majority of this silverware is now catalogued online, it's a question that offers at least the possibility of an "armchair" solution. Most of them are catalogued at the National Maritime Museum at Greenwich, with a few others -- part of the Lefoy bequest that included Sophia Cracroft's collection -- are now at the Scott Polar Research Institute. Another small collection was retained by Dr. Rae, and later given by him to the University of Edinburgh, these do not seem to have been given detailed analysis (although, judging from the images as they appear in the SCRAN database, they unfortunately seem to have been polished!).
Posted by Russell Potter at 8:56 AM