Whose are the Franklin relics? 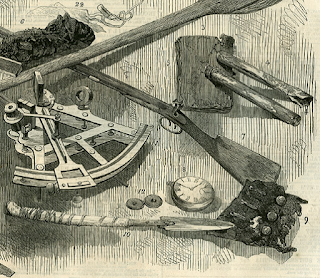 There's been a spate of reporting -- much of it plagued with inaccuracies -- about the ownership and disposition of the relics of Sir John Franklin's expedition, specifically those relics which have been brought back from the wreck of HMS "Erebus" by Parks Canada, and those that will (hopefully) be brought back in the future. Some believe that, under the Nunanvut Land Claims Agreement of 1993, the relics ought to belong to the Inuit; others feel they rightfully belong to all Canadians; still others have put forth the (misleading) claim that Britain will get to "cherry pick" those relics they want to keep. Before I offer my own view, it's best to start by clearing up the considerable -- and avoidable -- confusion over the legal status of these relics.

First off: while certainly the Inuit have a strong interest in the disposition and display of these relics -- after all, they're hard evidence of the value of Inuit oral traditions -- they legally belong to Canada. This is because, under international maritime agreements, the contents of any modern military wreck belong to the nation whose ship it was. In the case of HMS "Erebus," that nation is the United Kingdom. However, there exists a very clear memorandum of understanding (MOI) signed by representatives of both the UK and Canada, transferring salvage rights to Canada (with the exception only of any gold that might be found). While yes, it's true that the NLCA assigns ownership of archaelogical finds to Nunavut, that probably doesn't supersede national and international law (though I should emphasize that I'm not a lawyer); though conceiveably the Government of Nunavut could make a legal objection, that would only have the effect -- to my mind very unfortunate -- of delaying the hoped-for public display of these artifacts, which is something of significant value both to both Nunavummiut and other Canadians alike. It's also unfortunate because, as I understand it, agreements were already at least tentatively in place for the HMS "Erebus" historic site to be co-administered by Inuit and Parks Canada, with an interpretive centre in Gjoa Haven in the works. These plans are said to include working "closely with the Kitikmeot Inuit Association to negotiate an Inuit Impact and Benefit Agreement as required under the Nunavut Land Claims Agreement."

Secondly, despite the recent reporting otherwise, the MOI does not give Britain the right to "cherry pick" relics it would like to keep. The exact language of that agreement is in a proviso to the section assigning Canada ownership of "everything recovered from that wreck," which provides that "any recovered artifacts identified by Britain as being of outstanding significance to the Royal Navy will be offered to Britain for display in an appropriate museum." Again, though I'm not a lawyer, the import of the word "offered" seems to be "for display" -- that is, the objects would be loaned for that purpose by Canada. The loan could, conceiveably, be long-term, but the clause doesn't seem to me to obviate the "everything" of the main section. And indeed, there are plans afoot for such a display, one that would first be mounted at the National Maritime Museum in Greenwich, and then shown at the Canadian Museum of History in Ottawa. This is just the sort of co-operative bi-national exhibit that I believe the MOI -- written before "Erebus" was found -- had in mind.

I believe -- I hope -- that everyone involved with this magnificent discovery acknowledges two central facts 1) That HMS "Erebus" might well never have been found were it not for the Inuit oral traditions as to its location; and 2) These relics tell a tale of both British and Canadian history, as well as Inuit history, that very much ought to be told from an international stage. The unfortunate truth is that, even were it decreed that these relics were the sole property of the Inuit, there is no appropriate archive in Nunavut where they could be conserved and displayed. The original Archives of Nunavut, created in 1999 with the establishment of that territory, are stored at the Prince of Wales Northern Heritage Centre in Yellowknife, but that repository long ago reached full capacity. Presently, new items for this archive are going to the Canadian Museum of Nature, where they are, as with the Yellowknife materials, held in trust for the Government of Nunavut and its people.

It's my fervent belief that these extraordinary relics and the story they tell belong to all Canadians, including Inuit -- and, in a symbolic sense, to the nation that launched the Franklin expedition. Co-operation and mutual trust between all parties is essential, and hasty and inaccurate stories about the disposition of the relics do nothing to advance this cause.
Posted by Russell Potter at 6:30 AM