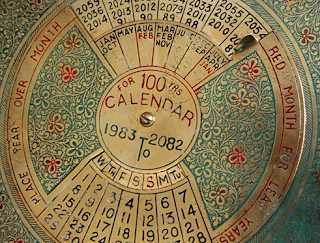 As a fact-checker, one of the most common things I've had to check in articles about the Franklin expedition are numbers. 128 men? Yes, but only if you exclude those who sailed from Greenhithe but were invalided out and sent home, and you don't count Franklin himself. Dozens of search expeditions? Well, thanks to W. Gillies Ross, we can say that three dozen is a roughly accurate figure, if we limit ourselves to the era up to and including McClintock's search aboard the Fox. But one of the trickiest figures to settle is the number of years we should count Franklin's expedition as missing, which is tied up with the question of what "missing" means. As the author of an upcoming book whose title refers to a "165-Year Search," of course I have some views on the subject.

When Franklin sailed, almost exactly 171 years ago (May 19, 1845), his ships were provisioned for three years of full rations (early press accounts later tended to exaggerate this figure, in part to stave off public concern). Neither he nor the Admiralty expected any immediate news, and given the vagaries of cairns and messages in tin cylinders, it was certainly possible that word -- even of success -- might be considerably delayed. Franklin's sailing orders suggested that, if he made the passage, he might consider calling at the Sandwich Islands (Hawaii) to give his crews some R&R, but even had he done so, word of his arrival there would have taken weeks or months to reach London. So it's hardly right to date the Franklin "mystery" to 1845, since there was nothing mysterious about the lack of contact then, or in the succeeding three years. This brings us to 1848, when the first large-scale search sent by the Admirality, that of James Clark Ross, was dispatched. They found no traces of Franklin or his ships, which in one sense is the first note of concern -- but that was not publicly known until he returned to England in 1849. That's the year that I date the "mystery" to, and why -- going from that moment to the discovery of HMS Erebus in 2014 -- I chose the 165 years of my title. There's an argument to be made for 166 years(if one uses either the three-year provision measure, or the date of Ross's initial sailing) or even 167, if one starts counting in 1847, when the very first expedition sent to look for Franklin, that of Richardson & Rae, was dispatched. It's completely wrong, though, to refer as did Macleans in 2014, to a "169-year-old mystery," using the 1845 date, at which time there was no "mystery" at all.

The other number that still vexes, despite Gil Ross's fine work, is the number of search expeditions since the finding of the Victory Point record. Part of it is the question of what qualifies; should we count Allen Young's voyage, even though he never reached the intended search area? Or what about Charles Francis Hall's first foray, which left him stranded on Baffin Island, hundreds of miles from his goal? These questions get even trickier in the twentieth century, when many who sought out Franklin sites were more like pilgrims than searchers, and often were simply making a side-trip from a journey made for other purposes. In my book, I've counted every search that managed to reach its planned search area, even if it was a side-trip, or (as sometimes happens due to weather and ice conditions) it was cut short. By these criteria, the "modern" era -- starting with Rasmussen in 1921 --  gives us fifty-three Franklin searches prior to the first Parks Canada search in 2008. It's a surprising number to some, since relatively few of these searches garnered much publicity. Many know of the exhumations on Beechey in the mid-1980's, but few are aware of Owen Beattie's two earlier exepditions to King William Island; others may know something of searchers such as Dave Woodman or Barry Ranford, but not realize how many times they returned to search again.

And even with that, the number is impossible to absolutely fix. Some searchers have proven nearly impossible to identify or trace, such as the mysterious "Coleman and Holmberg of California," mentioned in William C. Wonders's account as having searched King William Island in 1965, while others, such as John Goldi's 1975 trek, are so incompletely documented that one wonders whether they ought to be counted or not. I've come up with a solution for that, though -- I just say "more than fifty." Which, when added to the 36 in Gil Ross's account, along with Hall and Schwatka, and the seven Parks searches gives us "more than ninety" searches in all. At least for now.
Posted by Russell Potter at 6:35 AM