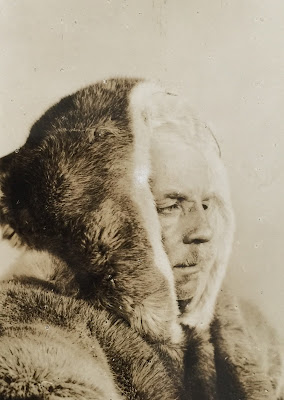 One could say that he was the first of the "modern" era of Franklin searchers, but Lachlan Taylor Burwash was at the same time very much rooted in the past. Born in 1873 in Corbourg, Ontario, he was the scion of a long line of eminent Burwashes; named after his grandfather, he grew up under the watchful eye of his father, Nathanael, who was dean of theology and eventually president of Victoria University, which later moved from Cobourg to Toronto. Young Lachlan apparently had a more worldly bent, earning a degree in mining engineering at the University of Toronto -- a prescient specialty, which he soon put to use in administrative work in the Yukon territory during its gold-rush days. When World War I broke out, Burwash enlisted, although he was already forty-one years of age, and rose to the rank of Major (references to him during and this period frequently name him simply as "Major Burwash"). At war's end, he spent some time in London, making the acquaintance of Rupert Thomas Gould, a gifted horologist and bibliophile. It was at Burwash's request that Gould made his famous map, one which catalogued and gave the coordinates for every discovery of evidence related to the Franklin expedition.

It's not quite clear which was the chicken and which the egg, but Burwash soon secured a position with the government of the Northwest Territories -- ostensibly to do geological and practical surveys of the Arctic, but with a broad mandate that would enable him to pursue his Franklin fascination along the way. Posted at King William Island for a season, he solicited stories from local Inuit, and was rewarded with hitherto-unrecounted tale of a cache of crates near Matty Island. Two witnesses, Enukshakak and Nowya, recounted finding a stack of twenty-two wooden crates in an area northeast of Matty Island. The crates contained food, including tins, some of which they said were painted red (only the Goldner's tins supplies to Franklin were known to be so). And, although the story has been dismissed by some as simply referring to crates thrown overboard in the vicinity by Amundsen, which amount to twenty-five in number. Still, as Dave Woodman has pointed out, crates don't stack themselves, and those jettisoned by Amundsen were mostly of pemmican, not the flour ("white man's snow") or red tins reported by Enukshakak and Nowya. Most intriguingly of all, these same two witnesses spoke of a wrecked ship not far from their find, three-quarters of a mile offshore.

Burwash was of course tremendously excited by this story. Over the course of the next several years, he made a number of attempts to visit the site and confirm the testimony. And yet, to his everlasting frustration, snow and ice cover repeatedly prevented him from being able to do so. He searched in other areas as well, including the site of Ross's North Magnetic Pole, and the northwest coast of King William Island (with Dick Finnie, a previous 'searcher of the month'). He retired to his childhood home in Cobourg in the mid-1930's, lecturing on his Arctic researches and writing for a variety of newspapers and magazines. Lachlan Taylor Burwash died in 1940, but his findings still hold potential. Several times, through the 1960's, pilots reported seeing signs of a wreck near Matty Island, and the site has never had a thorough archaeological study. With HMS "Terror" still unlocated, it remains a tantalizing possibility.
Posted by Russell Potter at 8:35 AM