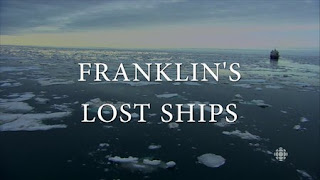 After the jubilation so many of us who've followed, or been a part of, the search for Sir John Franklin's ships, felt at the 2014 discovery of HMS "Erebus," still upright and proud upon the sea-floor, there was an inevitable period of letdown. We were, of course, well aware that it would take years to fully probe this find, to extract the secrets that she took with her to the bottom. We had to be satisfied with glimpses -- the propellor well, the deck illuminators, a bilge pump, a bell. When ice dives were announced for April of 2015, our spirits revived, and we shared in the excitement when new artifacts were brought to surface and sight: china plates, a cannon, even the buttons from a Marine's coat. What further wonders awaited?

But alas, as has happened with many such exciting ventures, the glow of discovery has now been dimmed with the clouds of acrimony. Jim Balsillie, whose Arctic Research Foundation was a key partner to last few Parks searches, wrote an angry letter to Environment Minister Leona Aglukkak, complaining that the television documentary Franklin's Lost Ships, co-produced by Lion TV in the UK, and Canada's  90th Parallel. Balsillie claims that the documentary shorted the contribution of the Parks Canada team and the role of the icebreaker Sir Wilifrid Laurier in the search, and gave and undue portion of credit to the Royal Canadian Geographical Society. Then, in a move that caught everyone by surprise, photojournalist Paul Watson resigned from the Toronto Star, claiming that a story he'd wanted to report on, which apparently included Balsillie's complaints, as well as a claim that 'civil servants' -- presumably either Parks Canada's team or the crew of the Laurier -- had been silenced.

It's a puzzling situation. Why on earth Balsillie would address his complaints about the documentary -- in the production of which the Canadian government and the RCGS had no role -- to the Environment Minister is the first puzzle. What could he expect her to do? But let's say he had indeed approached the documentary's actual producers, what then? All of them have stood behind their work, and as the lead fact-checker for this documentary, I do as well. To me, Balsillie's comments simply reveal a poor understanding of how documentary films work. (I've been involved with quite a few of them -- on-camera with the 2005 NOVA "Arctic Passage," for which I also served as an historical consultant, a role I've filled for John Murray's "The Lost Expedition" (2004), Mill Creek Productions' "The Northwest Passage" (2014), and now the Canadian, UK and US versions of "Franklin's Lost Ships").

The first stage, once the basic subject of the documentary has been established, is to obtain the visual and other "elements" from which the film will be made. Depending on the budget and the time-frame, these may include location shots (used to establish a sense of place); if the locations are remote, as is the high Arctic, the production company may send only a small "second unit" team, which can capture the big visual elements needed later. Then, a series of experts will be interviewed, sometimes at considerable length, with multiple takes of the same line of questioning. If the budget allows, there may historical re-enactments of key scenes. Lastly, there will be some in-studio visuals -- maps, old photographs or other 2D sources, CGI animations, titles, and so forth.

The point of gathering as many elements as possible is to give the director as much flexibility as possible in the editing process. It's always best to have multiple shots, or "angles" of a certain subject, and multiple takes of an interview, so that they can be edited into a smooth sequence, and the director can choose the best, or clearest takes. The key imperative is to tell a compelling story, and having multiple elements to choose from makes this possible. Typically, for a documentary feature, a ratio of 10:1 of elements taken to elements used is common; in commercial feature films, this ratio can run much higher. Charlie Chaplin, famously a perfectionist behind the camera, often shot as much as 400,000 feet of film for a feature that, in its final cut, was only 9,000 feet long!

At times, though, a documentary director may have to do with a limited number of shots; it's too expensive to re-take shots at remote locations, and there may be some key elements -- newsreel footage, or live events -- for which only a single source is available. In those cases, the director works to use them in a way that fits most closely with the story being told. All along the line, as the story is being developed and polished, historical consultants such as myself are asked to confirm the particulars, and make sure the final edit, and the voiceover, are free from any factual errors; in my work, I'll typically review a series of several draft scripts, along with answering dozens of ad hoc questions as the process plays out.

As a result of this same process, it's meaningless to measure how "important" someone or something is by how many seconds, or minutes, they're shown on camera. Plenty of important people saying important things have ended up on the cutting room floor, if what they said doesn't form a vital link in the story that the documentary is telling. Some people do better on camera than others, and may become the director's go-to talking heads simply because what they say is clearer, and more to the point, and easier to edit into the storyline -- but in general, unless the program has a host, these voices will be spread around, as the effect of several experts or commentators with different backgrounds is stronger than having the same person talking all the time. We can't all be Jacob Bronowski.

Balsillie seems most miffed that the documentary doesn't show enough of the Laurier, along with the Martin Bergmann (a vessel he paid to outfit), or the Gannet and Kinglet, the boats that did much of the side-scan work -- though in fact, all these vessels are shown in the documentary, and repeatedly. 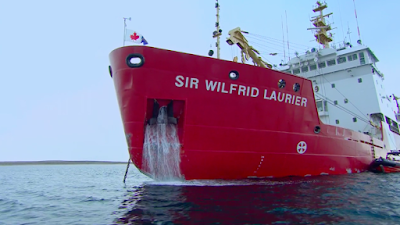 As he doubtless knows, the small filming unit sent to the scene of the (then only potential) discovery was based on One Ocean Voyager, and had only limited access to the Laurier and the research vessels. Given that, they managed to take some impressive shots, giving the overall scene of the search, as well as a clear sense that it was indeed the Parks Canada team that was doing the actual searching; we see camera angles of the team, shots off the bow of the research vessel Investigator, and team members monitoring the sonar screen. And, in at least one sequence, we see a sonar boom being lowered from the Martin Bergmann -- one would think this would have made Balsillie happy. 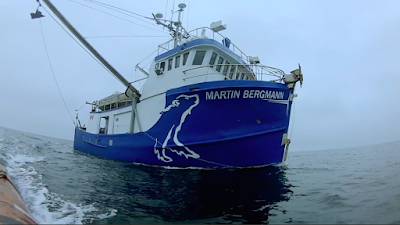 John Geiger, fulfilling his and the RCGS's designated role of 'communications,' speaks in broad terms of the challenge of the ice, and the difficulty of the search -- not claiming any personal credit for it -- and his screen presence is modest compared with the multiple segments with Marc-André Bernier and Ryan Harris, showing them at work and giving their perspective both before and after the discovery.

Balsillie is also upset that the AUV, one of the much-vaunted technological innovations, is shown being deployed, when in fact it wasn't used in the 'southern search area,' and had nothing to do with the discovery. But if he'd looked more closely, he'd have seen that this is exactly the point: scenes of the AUV's being deployed are used as a segue from the earlier attempts to get at the Victoria Strait area, underscoring the limits of human endeavor, after which the story switches -- as did the expedition itself -- to the southern search, where we can clearly see the older side-scan sonar depoloyed.

Throughout the documentary, Ryan Harris and others from Parks Canada are featured prominently, and it's quite clear that it's their discovery; I don't think anyone watching the program could possibly miss this point, or the excitement felt by Harris, Bernier, and others. The credit, clearly, is theirs. It's not the documentary, in the end, that contains errors -- it's Balsillie's letter, which makes repeated, and demonstrably false claims about the documentary.
Posted by Russell Potter at 6:26 AM