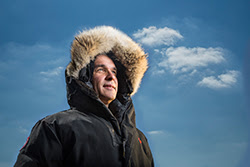 At the conclusion of several seasons of conducting a gruelling magnetometer survey over the ice of Wilmot and Crompton Bay -- a search which, he'd hoped, could pinpoint the location of one of Franklin's ships by detecting its engine -- I can recall David Woodman ruefully declaring that he felt there wasn't a great deal more that could be done, barring the sudden appearance of a 'friendly millionaire.' And doubtless many Arctic researchers of all kinds, their funds cobbled together out of grants, sponsorships, and their own dwindling bank accounts, have said much the same.

For a time, it seemed, Jim Balsillie was the answer to a Franklin searcher's prayer -- a man with deep pockets, broad enthusiasm, and the patience to find out just what was needed for each year's search, and provide it. The research vessel he donated, the Martin Bergmann, was a sort of dream: crammed with all the latest technology, it was carefully chosen so that it could be carried aboard an icebreaker, and lowered by crane into the water. Balsillie's Arctic Research Foundation proved instrumental to the last several years of Parks Canada searches, and articles in Maclean's and Canadian Geographic have lionized him as the prime mover behind the successful 2014 search for Franklin's ships.

But now he's angry. He's written a long letter to Environment Minister Leona Aglukkak, complaining about the way the discovery's story has been told in the Lion TV/90th Parallel documentary that aired on the CBC. Why he would write to her with his concerns instead of the the actual producers of the documentary is a mystery -- but of course by now they've read the letter as well, and stand behind their work.  And, as the lead fact-checker and historical consultant on the project, I can say without hesitation that they are right to do so. Every detail of these documentaries has been carefully researched, and neither the Government nor the RCGS had any say whatsoever in how the story was told. Balsillie's complaints strike me both as sour grapes -- he doesn't think that he's gotten enough credit -- and naive; he seems to have very little idea of how documentaries work.

I'll address the criticisms of the documentary specifically in a post to follow. But now, there's another wrinkle -- prizewinning photojournalist Paul Watson has quit his job at the Toronto Star, claiming that its editors suppressed a story of his about problems with the 2014 search. On his blog and in interviews, Watson alludes both to Balsillie's letter, and to (so far, rather vague) claims from 'civil servants' -- presumably Parks Canada employees -- about not being credited, or being allowed to tell their stories. It certainly is true that, as Government employees, Parks' archaeologists, or the crew of the CCGS Laurier, are not as free to speak as would be private individuals -- that's the nature of their jobs, not a scandal. Would I and other Franklin experts have liked information to flow more freely, or be less "managed"? Of course, but I don't know of any significant facts that were suppressed; both Ryan Harris and Marc-André Bernier have subsequently spoken at numerous public events and forums. Watson also implies, as does Balsillie, that the RCGS claimed outsize credit for its role, something of which I see little evidence. Watson promises a story, so we'll have to wait to see what it is before we judge -- but certainly, from what's now known, it seems a tempest in an Arctic teapot.

All of this, unhappily, obscures the tremendous achievement of the 2014 find of HMS "Erebus." It's sad to see such squabbling among partners, especially when there's plenty of credit to go around. The documentary acknowledges this, while making it clear that Ryan Harris and the Parks Canada team made the actual discovery. John Geiger, veteran Franklin searcher and CEO of the RCGS, practically wore out the phrase "and our partners" at the many press events he attended surrounding the discovery, and Canadian Geographic and other press articles all have given plenty of credit to Balsillie.

There is, however, one group of people I do think have not yet been given enough credit: the searchers and researchers who kept the search for traces of Franklin going for decades before the Government searches. Between 1925 and 2008 (the first year of the Parks Canada search), there were nearly fifty expeditions to the Arctic organized in part or in whole to search for Franklin and his ships, many of them accompanied by the Inuit who'd kept the oral traditions alive. Tremendous scholarly work, particularly David Woodman's careful analysis of written Inuit testimony, also laid the foundation for the eventual discovery by Parks. If there's anyone who has a right to feel slighted, it might be these folks -- but unlike Balsillie, they've all been supportive of everyone involved in the recent searches, excited by the results, and have expressed no rancor. There's more than one kind of generosity at stake here -- and the generous-spirited, in my view, are far better role models than the generous-pocketed.
Posted by Russell Potter at 7:00 AM