"Before Nanook" at the Velaslavasay Panorama 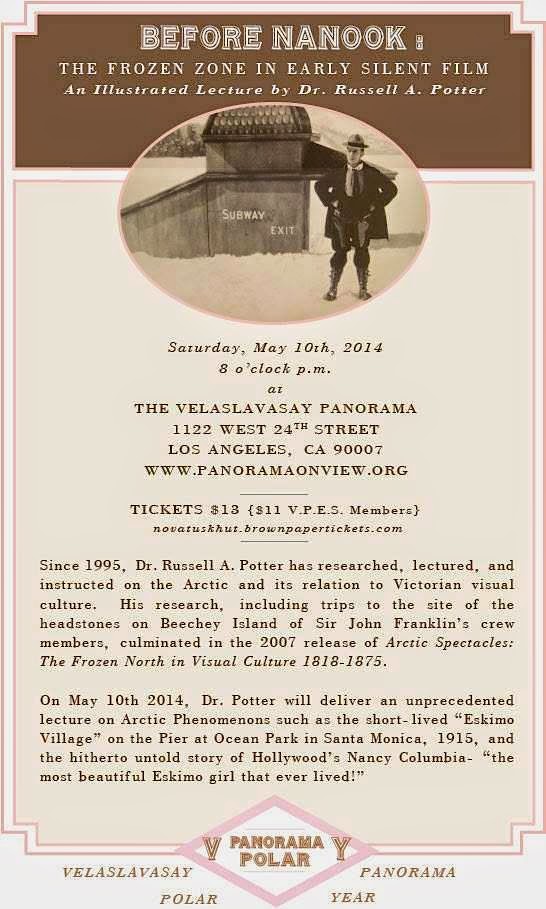 This coming Saturday, May 10th, I'll be joining my old Arctic friend and fellow-researcher Kenn Harper to give a talk on films of Arctic subjects made before 1922, the year that Nanook of the North, for better or worse, re-wrote people's ideas of why the "Frozen North" looked like. We'll be giving our talk at the fabulous Velaslavasay Panorama, home to the first and only genuine Arctic panorama of the twenty-first century, "Effulgence of the North," here in Los Angeles, California.

One might think that there weren't any significant Arctic films in the early silent era -- but then, one would be wrong. In my own research, I've documented over 100 of them, an astonishing figure even when one considers that, in the earliest days of the silents, 50 feet was the standard length of a film. By 1910, a typical feature took up an entire reel of film, about 1,000 feet or so (12-15 minutes, depending on the speed of the projection), and it was in this period that some of the most unusual Arctic features were made. Many people, for instance, hold the mistaken belief that Zach Kunuk's Atanarjuat (2001) was the Inuit-cast, Inuit-written film -- but in fact that honor belongs to "The Way of the Eskimo," produced by the Selig Polyscope Company 90 years earlier, starring and written by Nancy Columbia, whom Kenn has aptly dubbed "The Most Famous Inuk in the World" of her time.

Our presentation at the Velaslavasay will include stills and production shots from this film, as well as actual footage from several other films in which Nancy Columbia appeared -- ironically, though "The Way of the Eskimo" is not known to survive, most of her other roles were as "Indians," not Inuit. She and her family appeared in at least nineteen films between 1901 and 1920, and our talk will cover what we know about most of them, along with a look at the dramatic genre, the "Northern" -- which, had things gone a little differently, might have outlasted the "Western" in popularity.