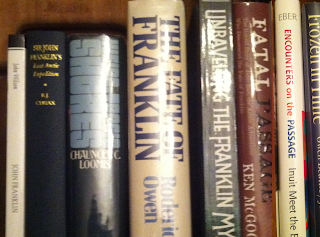 Recent Facebook discussions, along with a goodly percentage of my daily e-mail, center around which books about Sir John Franklin's 1845 expedition are the ones that an interested reader should begin with, and which are essential to further study. There are hundreds of possible candidates, and although little new has been learned about Franklin's fate over the past decade or so, that hasn't stopped new books from coming. And so I hope it will be useful for me to name the best of these books, in an informal manner -- I have no prizes or medals to hand out! -- in the hopes that those who are bitten, as I have been, by the Franklin "bug" will find what they need to steer themselves in the right direction.  And, having thought long and hard about the question, it seems to me that there are eight books -- just eight -- that I would wholeheartedly recommend.  Not all are easy to find, but every single one is worth the price of admission.  I give them here in the order in which I hope they might ideally be read, though knowing that the accidents of discovery may or may not correspond with such an ideal sequence.

First and foremost, anyone who cares at all about Franklin should get hold of the Arctic Press's facsimile edition of Richard Cyriax's study.  Was Cyriax an apologist for the Royal Navy? Are some of his conclusions mere 'conventional wisdom' that ought to be questioned?  Yes, surely, but his careful and meticulous study is filled with essential information, without which no meaningful speculation, and no sensible opposition to conventional wisdoms, can be made.

Secondly, I would recommend Roderic Owen's The Fate of Franklin.  Owen was a Franklin collateral descendant, and spent time with all kinds of sources which would be difficult, even in this Internet age, to pull together. The depth and breadth of his study make it worthwhile, despite a few minor errors and an annoying habit of not giving complete sources.

Third, I believe that David C. Woodman's Unravelling the Franklin Mystery: Inuit Testimony remains by far the most significant assessment of the Inuit accounts, which provide the best hope we will ever have of learning where to look, and what to look for.  Some of Woodman's ideas have evolved, and his second book Strangers Among Us would also be a worthy purchase, but without Unravelling there is little one could hope to do to truly understand the scope of Franklin searches, then or now.

Fourth, Dorothy Eber's Encounters on the Passage: The Inuit Meet the Explorers, is a very important supplement to Woodman's work.  It is remarkable to see how long the oral tradition endured, and Eber is an expert guide to a broader understanding of how such traditions work.

Fifth, I can't help but recommend Ken McGoogan's Fatal Passage.  McGoogan has an axe to grind, and whether or not one agrees with his arguments about the nature of Rae's achievements, there is not better tonic for a person suffering from what I like to call "Franklinitis" than to have one's views cast suddenly and energetically into the kind of sharp argumentative relief provided by this landmark book.

Sixth, of course, would be Beattie and Geiger's Frozen in Time or its reprints.  Despite the limits of what their studies disclose -- after all, the three graves on Beechey are too early to tell us much about the last days of Franklin's men -- but theirs is, without question, the most dramatic and vivid investigation into the Franklin expedition ever made.  No one who has looked into the eyes of John Torrington will ever forget the experience.

Seventh, my late friend Chauncey Loomis's Weird and Tragic Shores gives us the most memorable portrait we are ever likely to have of the method and the madness of the greatest of Franklin searchers, Charles Francis Hall of Ohio.

Eighth, and last, I cannot recommend John Wilson's biography of Sir John Franklin too highly.  It was written as a YA (Young Adult) book, but it is by far more eloquent, more captivating, and more succinct than any of the several recent "adult" Franklin biographies to be issued.  It's an excellent final course in a Franklin meal, and one which aptly pulls together the whole picture of the man.
Posted by Russell Potter at 8:00 AM