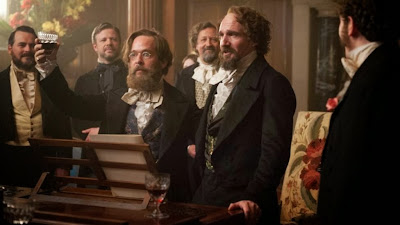 With the release on BluRay and DVD of Ralph Fiennes' film The Invisible Woman, based on the affair between Charles Dickens and Ellen Ternan, my thoughts drift back to the amateur theatricals, staged by Dickens and his protégé Wilkie Collins, which led -- unintentionally -- to their meeting. The first, Collins's "The Lighthouse," was a modest success before private audiences, but it was to be the next Collins/Dickens project, "The Frozen Deep," a melodrama about ill-starred Arctic explorers loosely based on the Franklin expedition, that brought Ternan -- hired when the play moved on to  public benefit performances in Manchester -- and Dickens together. How I would love to see the backdrop that Stanfield painted for that play -- but it, alas has gone missing. You can, however, see a view of the original private production, which was engraved in the Illustrated London News.

Dickens, as I've written about at length in my book Arctic Spectacles, was fascinated with Arctic exploration, following every detail of the search for Sir John Franklin and his men, and endearing himself to his wife Lady Jane Franklin by defending her husband's reputation in the press. He was obsessed with some of the darker themes of Arctic endeavors -- isolation, madness, and even cannibalism (see Harry Stone's magisterial The Night Side of Dickens for more on those). He took an active hand in Collins's plans for "The Frozen Deep," revising many parts of the script and managing all the stage scenery (which was made not only by Stanfield, but also by William Telbin, famous for his panorama of the "Overland Mail to India"). And, perhaps more importantly, he cast himself in the central role of Wardour, a Heathcliffian figure (another reason Fiennes should be perfect for this role) who agonizingly finds himself paired on an Arctic voyage with his more polished, gentlemanly rival for the great love of his life.

The play was a tremendous hit; Queen Victoria asked for (and received) a command performance for her and her family, and the benefit performances in Manchester reduced not only the audiences, but the cast members and stage-hands, to tears. And yet, despite many attempts at revival, "The Frozen Deep"never regained its original fame, although Collins made a narrative version a central part of his lecture tours in later years.  Dickens, feeling his amateur actresses might not be able to project effectively at the Free Trade Hall where the Manchester performances were staged, hired professional actresses -- among them Ellen Ternan, with whom he fell deeply in love. He left his wife Catherine, and spent the last thirteen years of his life with Ternan, taking care to hide their relationship from the public (see Claire Tomalin's The Invisible Woman, on which the film is based).
Posted by Russell Potter at 1:40 PM