The Letters of James Reid 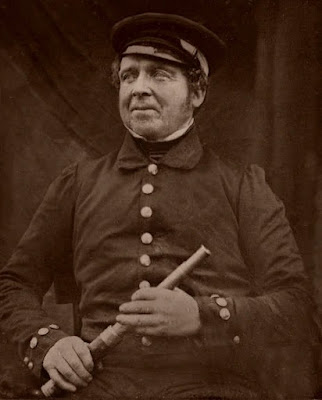 Of all the officers of the Franklin expedition, James Reid was one of the most lively and colorful.  As James Fitzjames remarked of him in the 'journal' he sent to his sister-in-law Elizabeth Coningham, "The most original character of all. rough, intelligent, unpolished, with a broad North Country accent, but not vulgar – good humored, & honest hearted – is Reid – a Greenland whaler – native of Aberdeen – who has commanded whaling vessels & amuses us with his quaint remarks & descriptions of the ice."

Reid's own letters, however, proved far more elusive than Fitzjames's; although his family in Australia (to which his daughter Ann had emigrated) searched for them for years, they seemed to have gone entirely missing. A few years back, my friend and colleague Andrés Paredes found excerpts from some of them in an Australian newspaper from 1920; until then, they had still been in family hands. The newspaper articles spoke of them having been given to the "National Museum" in Adelaide (now the South Australian Museum), but that entity had no record of them.

Until scarcely two years ago, these excerpts were all we knew; that and all other queries to research libraries in Australia turned up nothing. And then, like a bolt out of the blue, our fellow Franklinite Alexa Price found a listing for them in the online catalog of the State Library of New South Wales! This was a surprise on many levels; Reid's daughter had emigrated to Victoria, not New South Wales, and at the time the letters had been reported in the press in 1920, they were in the hands of one of Ann's nieces. They showed the letters to a certain Dr. W.P. McCormack, a physician with a practice in Tumby Bay; it was he who recommended their donation to the museum. But how then did they end up in New South Wales? Some years previous, I'd checked the online catalogs of all the state libraries, and there no listing was to be found -- so my best explanation is that the record showed up when the SLNSW's old card catalogs were digitized and combined into a new, comprehensive one. 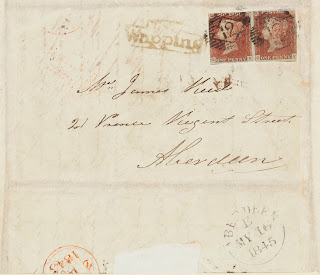 Scarcely a week later, our digital request was processed, and there they were; with help from Reid's great-great-great-grandson Rick Burrows we were able to cover the cost of high-resolution versions a few weeks after that. And what a revelation! Not only was Reid distinctive as a character, but as a writer; his odd spellings in some cases seemed to reflect Scots usage, but were often his own invention: "was" became "wase"; "well" was often "will"; "stop" became "stope"; and "job" "jobe." His ear for names produced interesting results, as when Blanky, his fellow Ice Master over on HMS Terror, became "Brinkly." These oddities aside, his rich personality is everywhere in evidence, from his first letter of 22 March (when he tells his wife of his plan to join the expedition) to his final one on July 11th. In all of them, he asks after his children, particularly his "three Darulins" (the Reids’ youngest children, Ann (1833–1899), Mary (1835–1909), and Alexandrina (1838–1901). At one point, apparently, seven-year-old Ann wrote to him herself, as he thanks his wife for "Anns most welcome Letter" -- alas, that note was lost with the ships.

We can see him pondering his fate, and weighing the success of the Franklin expedition against other possibilities; unlike Naval officers, whaling captains were freelancers of a sort, competing for available commands and trading on their experience and connections. Reid had a particularly close relationship with the whaling firm of Samuel Enderby and Sons, and asked them to look after his family in the event he did not return. He was aware of the risks, and of the possible envy some might feel toward him, saying "No doubt there will bee a greate talking about me going this voyage, it will show that I am not frightened for my life, like some men." Most poignantly, he seems to have asked his wife Ann for a lock of her hair, which she declined to send, saying it was too gray. This prompted James to write:

You mention that your old Gray Hare wase not worth the sending to me, I cane only tell you that your old gray Hare is as good to me as ever, and I would [have] been very Happy if you hade inclosed one Lock of it.

As to his shipboard comrades, Reid speaks of them in admiring tones, and particularly seems to have formed a bond with young Harry Goodsir, who was assigned to the neighboring berth. "Him & I is quite chief," he wrote (chief being a Scots word for a close friend) and marveling that Harry had never been to sea before. And throughout his correspondence, his deep love for Ann and his family comes through in every word. His very last letter, sent from the Whalefish Islands, ends thusly:

Respects to Robt., Forbes, and all Friends, may the Lord bee with you and my Dear Family, for three years if not through before that time, keep yourself easy about me. Trust wee will meet Again. Remember me to William Gaudy wife & family Bidding you all Good By.

Posted by Russell Potter at 1:05 PM