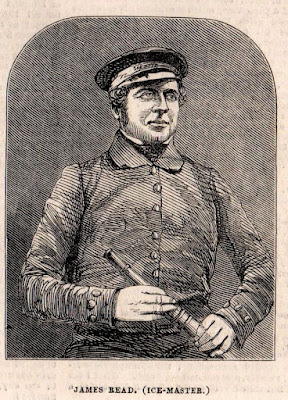 In my last post, I gave some previews of the remarkable letters of James Reid, the Ice Master of HMS Erebus, as they will appear in our forthcoming book. Now, I have something even more exiting to share: thanks to the great generosity of Dundee native Gordon Morris -- who memorably portrayed John Weekes, the ship's carpenter aboard that same vessel in AMC's The Terror -- we can now hear some snippets from Reid's letters in the accents of their original writer! A Dundee accent, Morris explained to me, is not all that different from an Aberdeen one -- it's just "a wee bit further up the northeast coast" -- and, heard here in its original tones, Reid's seemingly irregular spelling now reads as nearly phonetic. And more than that: as with many who have so far listened to these recordings, I had the eerie sense that Reid himself had, as it were, returned from the past, as alive as the day in May of 1845 that he sailed down the Thames with Sir John Franklin and his men.
I've arranged the excerpts in chronological order, mainly so that the context of Reid's words will be clearer; each is linked alongside the original text of the letters.
22 March 1845 -- the "Neptune" was a ship previously captained by Reid; he apparently had already made up his mind to sail with Franklin.

8 Smiths Place High Street Wapping March 22/45
Loving wife,
I hope you have received my yesterdays letter with the one pound chake from William –
There is a Letter come from Quebec from the Owner stating that if Captain Reid can be found to get him if not engaged to take charge of the Neptune and sail for Quebec 1st April – now you see how mean some Scotsmen is to pay a Master off for a few weeks. I called on them to day and told them that i wase engagen with Sir John Franklin R.N. to go with him to the North as ice Captain, but I would give them an answer on Tuesday. During th[at] time i will call on Sir John, at Woolwich, [and] if he puts me on pay just now @ £18 pe[r Month], I fix and I take my chance of the Voyage. I go [as] Master & Pilot, it is sure pay and good company. I dined with all the officers, we can find no servant, we must find one amongst [us]. You will have half pay, if I should never return, then there will be something for you and the family. Mr. Enderby will see after that what I have mentioned all Depends on putting me on pay just now, if not I take command of the old ship.

so now I Shipped yesterday with Sir John Franklin R.N. to go with him to Daviss Straits, and up Langester sound in search of a passage through, it may be two years and it may be three & four but I am quite willing to go. It is no use lying at home being allwise in measurie the thoughts of your leg and leaving the family is worse than the Voyage. Sir John told me that if I went the voyage with him, and landed safe in England again, i would bee looked after all my life. The ship I go in is the Erebus, and the other is the Terror. just such ships as the Hecla but not Quite so Large. Sir John is a man 60 years old. Quite a Hero he is very fond of me as is the officers, as i answer all the quistences they put to me about the Land and ice about the Quarter we are going to.

13 May 1845 "The Black Ladi" -- this refers to the medical exams for the crew; those that were "casten" were deemed not fit to serve. The "Black Ladi" was likely a young Black seaman of the day.

Mr. Valentin[e] wase casten for the Scurvey in his Leges and the others for several things an the Black Ladi wase casten for his Leg having once Broken. – – I Received a Letter from aunty at Dundee mentioning she had Received the four Pound, I would like to here if you have Received the Money. in all sent £4[...] I will write before I Leave the River.
Remains,
your Loving Husband
James Reid

16 May 1845 -- Mind yourself -- This letter seems to be an admonition to his wife Ann to be careful in her family dealings -- particularly with their sons -- during his absence.

Loving wife, mind yourself. Dount you trust to one of them for as soon as they can do for themselves they will never mind you nor me, you dount see so much of the world as I see. Let them from Home, then the Chief Part of young men Forgets there Parents and friends. Take all but give nothing, mind this Take care of yourself & the three young Lasess they are not able to mind themselves. –

19 May 1845 -- The day of sailing [full letter] "Finlason" was a tailor in Aberdeen to whom the Rieds apparently owed some money. David Leys did sail with the expedition, but not as Quartermaster.

Loving wife
we are now all clear for a Start. will sail to day we are to bee towed with steam Down to the orkness – Lady Franklin hase ordered all the officers Likeness to bee taken and mine amongst the Rest, with my uniform on – She keeps them all by herself – Sir John Franklin Gave us prayers yesterday his Lady wase in Company, your order will bee sent to you when due. I got 6 Month’s Pay – I joined the Erebus 27 March, bee sure and Call on Mr. Finlason the Tailor and make arrangement with him, you know more about his account than I do, once you are underway with your half pay, you will bee abale to pay him part Every month, once you get the account below twenty pounds he canat Hurt you – the other Ice Master wase taken out of the ship for £37, but I Rather think he hase got it settled, we paid the Ships Comp[an]y on Saturday last. David Leys is not Quartermaster. I have nothing more in the meen time will write by the steamer if we dount go into the orkness.
Good Biy keep your hart up we will both meate again, this voyage perhapes will [be] the last that ever I make. I have nothing to doo my work is Coming. I am sorry to say I am badly of[f] for Quarter Masters, and we are the leading ship, it will keep me much on my legs – I think I have Every thing Right but short of White Shirts, and whate I have are Quite gone. This Leave me Quite well. Hopes it will find you and the family the same, by this time you have Received my Chest. –
Remains
your Loving Husband
James Reid

3 June 1845 -- "your old Gray Hare" (from Stromness, Orkney) -- Reid had apparently asked his wife for a lock of her hair in an earlier letter.

You mention that your old Gray Hare wase not worth the sending to me, I cane only tell you that your old gray Hare is as good to me as ever, and I would [have] been very Happy if you hade inclosed one Lock of it.

Posted by Russell Potter at 1:09 PM