While we may never know exactly which of the several candidates for John Gregory's birth is the right one, there's a good deal more we can say about him. Perhaps most significantly, he has a listing in the Royal Navy's earliest volume recording the service of engineers; so far as I know, this entry hasn't been seen or cited by anyone researching his career.
Unfortunately, rather than recording his age, service, and character, the entry simply contains a statement, written across both pages of the ledger: ""This Engineer was recommended by Messrs. Maudslay to serve in the Vessels employed on the Arctic Expedition having been accustomed to locomotive engines his pay to be double of that allowed to 1st class Engineers (Woolwich 6th May 1845) ... Appointed 13th May 1845 Admiralty "Erebus" 1st acting ... Apptd. 1st Class Assistant 6 June 51." So we now know for a fact what we previously only inferred -- that he was recommended by his employers, Maudlay, Sons, and Field; we also know that he was specifically appointed with double wages. I checked the ledger, and a nearly identical statement is written in the record for James Thompson, who served as engineer aboard HMS Terror, but as with Gregory, there are no personal details.
Yet we do know one other thing about John Gregory, thanks to the envelope containing his lone surviving letter: we know his address was 7 Ely Place, St. George's Road. The location is a fascinating one; scarely a stone's throw to the east of the old Bethlehem Lunatic Asylum (now, perhaps fittingly, the Imperial War Museum), it also had an interesting neighbor for the first few decades of the nineteenth century: a large cylindrical shed used by Henry Aston Barker and his successors to paint new paintings for the Panorama in Leicester Square -- among them depictions of three Arctic expeditions: Franklin and Buchan in 1818, James Ross and James Clark Ross discovery of "Boothia" (1829-33), and James Clark Ross's search for Franklin (1848-49) -- it's the circular structure just to the southwest of Ely Place. This map, made circa 1800, shows that there was, originally, a row of small flats along the eastern side of Ely Place at the time. They seem likely to have been modest, townhouse-style flats; it would have been solidly respectable --- though somewhat cramped -- housing for John's wife Hannah and their six children. It was also within walking distance of John's employers. 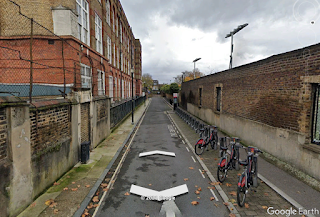 These humble homes, alas, didn't stand for long; in the 1880's they were replaced by the West Square School for Boys, Girls, and Infants; its building still stands and is presently the Charlotte Sharman Elementary School. The building reduced Ely Place to more of an alleyway than a street; in 1934, after the land and buildings of the nearby asylum were purchased by Viscount Rothermere (then owner of the Daily Mail), the land on the opposite side of Ely Place was turned into a park named after his mother, Geraldine Mary Harmsworth. At around this time, it seems, the name of the street was changed to match, becoming Geraldine Street -- a name which the UK gazetteer tells me is unique in Britain. This image from Google Earth shows the view looking down Geraldine Street; the school building is on the left and the park is on the other side of the brick wall on the right.
I've already mentioned that John and Hannah's children were accomplished people -- several generations of them worked as engineers, with the exception of grandson Edward John Gregory, who became a noted painter. As to Hannah herself, she seems to have remained in the neighborhood, if not at the same address; in the 1870 census she appears to be living with her in-laws on South Street (modern Greenwich South Street) in Lambeth, but at her her death in 1873 she was apparently resident in the parish of St. Saviour's Southwark, a bit further north and closer to the river. I still hope to locate her grave, and will update this post if I do!
Posted by Russell Potter at 9:34 AM