The backstory of John Gregory's Skull 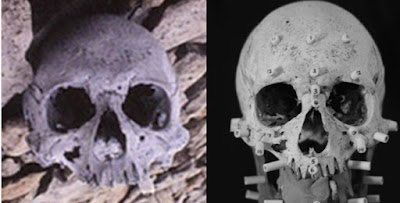 The news came this week that one of the skulls found at the site of the Schwatka reburial at Erebus Bay on King William Island has been identified using DNA as that of John Gregory, who served aboard HMS Erebus as an engineer; the story has reverberated around the world, and rightly so. His are the very first human remains to be identified using DNA by a team led by Dr. Doug Stenton, which has been able to extract DNA from dozens of bones in their work over the past decade, but had never found a match -- until now.

And yet one thing that hasn't been widely reported is that this skull, catalogued as "cranium #80," was actually not discovered recently -- indeed, though it wasn't brought back from stony shores of Erebus Bay until 2013,  it had first been spotted by Barry Ranford twenty years earlier. It's the same skull that he showed to the CBC's Carol Off when she was there for a short television documentary in 1995 (you can watch her original story here)

How can I be so sure? Well, Andrew Gregg, who was the cameraman on that occasion, also took a number of still photos, including this one:


As one can see, this skull -- when rotated to an upright position as I've done in the first image above, is an exact match for Keenleyside, Stenton, and Park's "cranium #80," the same now known to be Gregory's. The indentations associated with the missing teeth are identical, and so is the shape of the distinctive injury to the right maxilla. You can even see the small circular dot or indentation just above where the nasal bones meet the frontal bone.

The other skull, the one atop the reburial, had grown quite mossy, as can be seen in another of Gregg's photos, quite a different situation from its bleach-white brother:


In 1997, the two crania on the surface, along with a nearby femur, were placed in a metal box for protection and cached on the site in a new cairn, by Ranford's friend John Harrington. Ranford himself had committed suicide the previous autumn, but Harrington was to return on at least six more occasions, continuing the search for Franklin remains that his late colleague had begun. A few years ago, John and I attended a lecture by Diana Trepkov, who did facial reconstructions of this and the other skulls found nearby. "Let's go have a look at an old friend," I'd suggested to him.

Back in 1993, when Ranford first came upon the skull, he was nearing the end of a long trek down the western coast of King William Island. His travelling companion had become so sick that he'd had to haul him along in the wheeled garden cart they'd brought for supplies, and time was growing short. At first, he'd thought it was a plastic bleach bottle, it was so white, but on coming closer he realized his error. It was to be a fateful discovery.
Posted by Russell Potter at 3:00 AM