The Orkney Telescope (part 1 of 2) 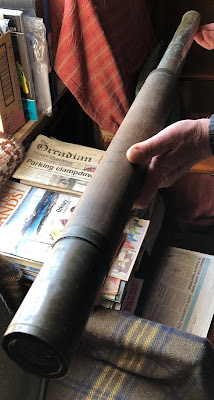 This week, we present a guest post by Mary Williamson, who is Sir John Franklin's great-great-grand-niece and a skilled researcher and archivist in her own right. I can think of no one better suited to relate this singular story of a possible Franklin relic, and the man who brought it back to Orkney.

During a visit to Orkney in May 2019, my husband and I came across a man with a particular interest in John Franklin. A friend of his owned a telescope that was reputed to be a relic of the 1845 expedition.  It was known in the family as “Franklin’s Telescope”, and the tale passed down was that William Simpson (1825-1879) from St Margaret’s Hope, Orkney, had traded it for a box of buttons while working for the Hudson Bay Company in the late 1860’s.

The family had no hand written record to confirm the story told by William Simpson, but they did have a couple of newspaper articles that had appeared in The Orkney Herald in 1881, headed  “Supposed relic of the Franklin Expedition." It was the discovery by Frederick Schwatka and subsequent removal of (the supposed) Lieutenant Irving’s bones from King William Island to Edinburgh that focused attention on the telescope. The first report was on 2nd March:


“Among the articles found in the grave of Lt. Irving, third officer of the ‘Terror’, was a lens, apparently the object glass of a marine telescope”

This, according to the reporter, was excellent news, because the Orkney Telescope was missing a lens, and by chance Lt Irving’s grave had produced one. If this lens belonged to the Orkney Telescope, whose owner had died three years previously without being able to prove beyond doubt that it was a Franklin Expedition relic, the problem was conveniently solved. However, a report two weeks later revealed Irving’s lens as a red herring. The reporter had visited Mr Thompson, the present owner & brother-in-law of William Simpson, & discovered that the telescope had never been missing a lens but had merely had a new one inserted. Thompson was able to fill in a few extra details from memories of conversations with Simpson:


“bought it from a native when on a trading voyage up Cumberland Gulf, and that on questioning the native as to how he got it, he (the native) said he found it in an upright position in a crevice of rock near the sea”

A slightly different version is reported in the same article, from the reporter’s notes that he made before calling on Mr Thompson:


“Simpson being able to speak the Esquimaux language made inquiry of the Esquimaux as to how he got it, and was told that it was found by the disposer at a place from the description of which Simpson concluded was a hut erected by some of the Franklin party”. 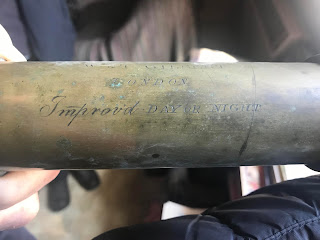 The telescope had no identifying marks on it as regards ownership, but the makers name, W & T Gilbert London, are clearly visible as well as  “Improv’d Day or Night”.

Dr Richard Dunn, telescope expert at the Science Museum, examined my photographs and gave a date from the 1820’s with a fair bit of leeway as designs didn’t change much, so this date would fit the 1845 expedition.

Officers had their own telescopes, but it seems most likely that Sir John would have owned a Dollond.  In the history of telescope design it was John Dollond who emerged head & shoulders above other manufacturers by using a particular combination of lenses that worked better than any other. Jane Franklin herself had chosen to present a Dollond telescope to Robert Goodsir for one of the search expeditions.

As to William Simpson, his career presents its own points of interest, which overlapped once more with the Franklin search, via no less a figure than Charles Francis Hall himself -- but we'll save that story for the next post!