The Tale of the Bones, Part IV

A lot can happen in a hundred and thirty years or so. Forensic science has certainly advanced, though access to the needed evidence remains an issue. It wasn't until the 2009 relocation of Westmacott's memorial that the bones interred within were open to examination, and so of course there was the keenest interest in doing so.

When the coffin was opened, it was full of touching surprises. A pasteboard cross with dried flowers was among them, as was a paper packet of teeth and note from George Henry Richards. The bones themselves were wrapped in an enormous paper chart of Papua New Guinea, though an Arctic chart was also present. The scientific effort to examine it all had to be accomplished in the relatively brief interval between taking apart the monument (then located in a stairwell behind the sacristy, out of public view) and its re-installation in the vestibule.

The team, led by Dr. Simon Mays and including my friend the late William Battersby, had their work cut out for them ---it was almost a sort of archaeological triage. A cast of the skull was made, with an eye to reconstructing the face, and the teeth were brought to the laboratory for analysis. Teeth, as it turns out, can be remarkably useful in tracing the life of their possessor; as their inner layers are laid down in youth, so is the signature of local minerals in the air and water that is remarkable in its precision. Even Ötzi, the "Ice Man," who lived 5,000 years ago, has been traced to his home town of Feldthurns in northern Italy by these means. Using similar measures -- isotopes of strontium and calcium -- the teeth of our Arctic skeleton were matched to the eastern coasts of Scotland. This, then, was certainly not the skeleton of Henry Thomas Dundas Le Vesconte, who spent his childhood in Devon within sniffing range of its chalky cliffs -- it was that of someone who'd grown up amidst the granite and gravel of Scotland.

Just twelve of Franklin's crew were from parts of Scotland; among the officers, we have the ice-master James Reid (Aberdeen), assistant surgeons Alexander Macdonald (Laurencekirk) and Harry Goodsir (Anstruther), who were fellow medical students in Edinburgh, and James S. Peddie, another Edinburgh graduate, from West Lothian. That gives roughly us sixteen potential candidates based on the tooth isotopes alone.

It would seem to be a difficult field to narrow, but one tooth had a second tale to tell:  a gold filling. It's not so much the costliness (which led earlier examiners to take it as proof the man was an officer) but the scarcity of such fillings that turned out to be the key. Gold fillings were rather uncommon at the time; the practice, in fact, had been introduced relatively recently by the Scottish dental surgeon Robert Nasmyth. And, as it happens, there's a direct connection between Nasmyth and Goodsir, as Goodsir's father was one of the dentist's closest friends, and Harry's brother John actually worked as Nasmyth's assistant! It's quite good circumstantial evidence that this skeleton might more likely be Goodsir's. 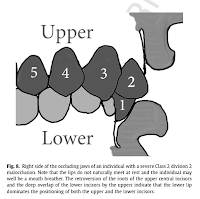 One final technique was available, that of "facial reconstruction" based on the skull. As we've seen a version of this had already been attempted in the 1870's, with inaccurate results. How could such a mistake have been made? Once more, it seems to have come down to the teeth; the sketch artist failed to take account of how the teeth of the mandible, in place, would have fitted with those of the skull. It turns out that this person had a fairly severe malocclusion (or "bad bite"), such that (to quote Mays et. al.) "the lips do not naturally meet at rest and the individual may well be a mouth breather." With the mandible correctly aligned, a new facial reconstruction was made, and -- when overlain upon the Daguerreotype of Harry Goodsir -- shows a remarkable match.

One can, indeed, see Goodsir's lower lip hanging a bit open in the photograph, precisely as would be the case if he had the malocclusion found in the skull. James Fitzjames, Franklin's second aboard HMS Erebus, even noted this odd feature in a line which was censored -- perhaps because it seemed unkind -- from the published version of Fitzjames's journal: "his upper lip projects beyond his lower and his lower beyond his chin producing a gradation thus: [see image at left] but a choker comes down beyond the chin so you imagine there is more of it." 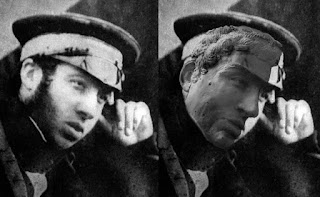 All of this adds up to a fairly high degree of likelihood that these were the bones of Harry Goodsir, the expedition's naturalist and primary scientific investigator. The ideal final piece would be a DNA match, but here we meet an obstacle -- although Harry came from a distinguished family of doctors, scientists, and churchmen, none of his brothers had any children. Thus, Harry's closest relations are along collateral lines -- descendants of his aunts, great-aunts, or great-uncles. It's still possible that some suitable DNA may be found -- the final piece of the puzzle will have to wait until then.

With thanks to Dr. Simon Mays, Mike Tracy, Regina Koellner, and Peter Carney for their assistance in preparing this post.
Posted by Russell Potter at 12:41 PM