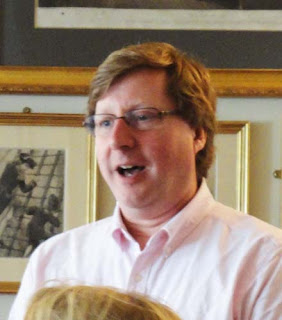 One of the things that has drawn together all of us -- academics, archaeologists, historians, and all manner of armchair searchers and seekers -- fascinated by the mysteries surrounding Sir John Franklin's 1845 Arctic expedition, is its singular embodiment of loss and tragedy -- and how could it be otherwise, with 129 officers and sailors lost, and only a scant five of them accorded the peace of a proper burial. And so, when of our own is suddenly taken from our midst, we feel the loss more keenly, but also with a strange sense of familiarity and proximity to our inmost spirits. When we first heard the news of William Battersby's death, the first thought that sprang to many of our minds, once we'd recovered from the initial shock, was to imagine him among that high-hearted though ill-fated crew. For he, more than most, had sojourned among them so many times in his imagination, and studied the particularities of their plight with such care, that no more fitting or congenial company than that of Fitzjames, Crozier, Franklin and their men might be imagined. Whatever our varied faiths, or even our agnosticisms, such a scene seemed to all of us immediately right and possible.

Some of us had met William, though many had not -- his energies and enthusiasm were so readily conveyed across the ether of the Internet that it seemed hardly to make a difference -- indeed, all of us had the same experience: that of a curious, generous, thoughtful, and immensely sociable soul, the sort of new friend and fellow-traveller that one recognizes almost instantly. Some of us trod the decks of HMS "Victory" in his company; others traded e-mails on the details of ship construction, lead poisoning, facial reconstruction, or the tangled texts of the "Peglar" papers. In my own case, I met him in person just once, when he visited me at my home in Providence, and we enjoyed a lively afternoon in my home library/study, hopping from this text to that, going over new ideas and theories, and enjoying (of course) a few cups of tea. We were so carried away in our conversation that I completely forgot to ask him to inscribe my copy of his book on James Fitzjames; in an e-mail, he assured me that he would, the next time we met. And now that meeting is never to be.

I first came upon William's work in his modest piece, hosted by the Hakluyt Society, in which he proposed that it might well have been the ships' water distillation process, and not the tinned foods, that was the primary source of elevated levels of lead among the crew. It was a glimpse of his singular talent, which in re-examining the things we felt sure were "known," and testing them to see whether the evidence was really there. In two regards he completely overturned the conventional wisdom, as we learned that the National Maritime Museum did not, in fact, have a single Daguerreotype in its collections, but was only licensing images made from a set of Calotype copies held by the Derbyshire Records Office! And, in another significant instance, he made use of studies of tooth enamel and the history of dentistry -- along with co-authors skilled at facial reconstruction -- to make a very good case that the remains interred at the Franklin memorial at Greenwich were not, in fact, those of Henry Thomas Dundas Le Vesconte, but rather of Harry Goodsir, the expedition's naturalist.

William was able to accomplish these remarkable feats in part because, although he'd spent much of his career in the business world, his first passion as an undergraduate had been archaeology. And so, in a way that relatively few of us "Franklinites" could have managed, he regularly collaborated with scientists and researchers as a co-author of papers in professional journals (a partial list of his publications is given below). Perhaps the most significant broader findings of these papers were that lead poisoning needs to be better understood in the context of known historical exposures (and thus falls short as a "solve it all" theory), along with a quite recent study that examined for the first time the full range of health issues experienced by the crews of Arctic expedition vessels.

But most will know him from his book on James Fitzjames. It's an invaluable contribution to the literature of the Franklin expedition, and along with William's articles, has spurred and will continue to spur further insights into the man and the men among whom he sailed. I'm reminded of the strong positive review by William Barr, surely the dean of modern polar historians, and a man seldom given to praise:


Battersby’s book is clearly based on a vast amount of dogged archival research. Undoubtedly many leads were dead ends, but his persistence paid off in what must have been a stroke of luck—his finding of the letter from Captain Stenhouse, identifying James Fitzjames’s father. But the end product is more than just the result of luck: the book is a well-crafted, highly readable biography. It will appeal not only to those intrigued by the fate of the Franklin expedition, but also to naval historians with a focus on the Royal Navy in the first half of the 19th century, and to members of the general public with a taste for mysteries.

Above all, William Battersby loved a good mystery, and had an almost Sherlockian talent for boiling things down to their essences. And now, his work on earth complete, our friend goes forth --  to a place where all that is hidden will be made clear, and every secret thing made known.

James Fitzjames: The Mystery Man of the Franklin Expedition. The History Press/Dundurn, 2010.

Identification of the Probable Source of the Lead Poisoning Observed in Members of the Franklin Expedition. Hakluyt Society Website.