Among all the storied names of Arctic explorers from the "heroic age," none resonates so widely, and yet (in some parts of the world) is so imperfectly known, as that of Joseph René Bellot. In the search for Sir John Franklin, which attracted support from people of many nations, he became -- in 1851-- the lone active-duty member of of the French navy to volunteer for such service. Although only twenty, Bellot was no stranger to exploration and its hardships; having already participated in French expeditions to Madagascar and South America; as part of his embrace of the rigors of Arctic travel, he permitted himself only one blanket, and a thin mattress atop a bare wooden board.

He served under William Kennedy during the latter's Franklin search, which covered more than 1,800 kilometers to and from their winter quarters on Batty Bay. Kennedy, for reasons that are still no quite clear, did not seem to fully trust his second; indeed, he went out of his way to prevent Bellot from making independent navigational observations. When the two came upon the strait that bisected Somerset Island from the Boothia Peninsula, Bellot was -- in part as a result of Kennedy's keeping him in the dark -- reluctant to claim it for what it was. So it was that, when Kennedy named the strait after him, Bellot a first felt more concern than pride; what if this vaunted waterway turned out to be as insubstantial as the Croker Mountains?

But it didn't. Indeed, although Leopold McClintock, the first to try to sail through it, was blocked by ice on its western outlet, the Bellot Strait was to become a mainstay of transit between the Eastern and Western Arctic, and is much used to this day; this past August, I passed through its waters three times aboard two different vessels. Because of its strong currents, it needs to be entered at slack tide, and ships often find themselves passing through in company with others. These same current make the strait, effectively a polynya, generally ice-free throughout the year except for that sea-ice that drifts in from one side or the other.

Bellot, committed to the cause of finding Franklin, returned almost immediately after his first expedition, serving under Captain Edward Augustus Inglefield. His high personal character and complete devotion to his duty once again drew admiration from all with whom he sailed; no work seemed onerous to him, no mission too risky. It was on one of these -- an attempt to walk over the ice to deliver a communication to Sir Edward Belcher, that Bellot met his end, falling through the ice so quickly that his comrades could find no trace of him save his walking-stick. The area, in Wellington Strait, is notorious for thin ice; one of my shipboard lecturimg colleagues this summer, Christian Haas, noted that it was near this same area in 2015 that two Canadian ice researchers met with a similar fate. It's comforting to think that it could have been just such a patch of treacherously thin ice, rather than some unexpected crack or lead, that took the life of such a skilled and resourceful man. 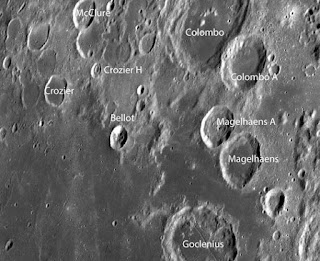 Beyond the strait itself,  Bellot's name is remembered in many places in the Arctic and beyond. At Beechey Island, a memorial headboard once stood beside those of Franklin's men; when the others were replaced by replicas, none was made for his, on the theory that it might confuse people as to whether he was buried there. This lack has since been made up by Jean-Claude Forestier, who installed a plaque on a nearby cairn in 2012. There is also, at the other side of the island, a plaque to Bellot placed between Lady Franklin's marble slab and Belcher's Cenotaph. In Greenwich, on the grounds of the old Royal Naval Hospital, a granite obelisk to his memory stands facing the Thames. And, perhaps most fiitingly of all, a crater upon Earth's Moon was named after Bellot in 1935; there, in the "Sea of Feritility," it has among its neighbors craters named after his fellow Arctic explorers Crozier and McClure, as well as two named after Ferdinand Magellan.
Posted by Russell Potter at 12:56 PM