Of Franklin and Fellowship 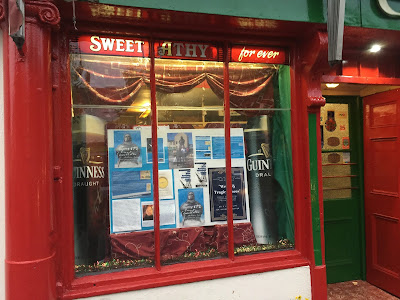 Having just experienced a fantastic series of Franklin-related events in Ireland and England, I was reminded anew of how, at a very fundamental level, the Franklin fascination is a collective undertaking. Each and every person who falls under the spell of this story finds his or her own path into it, and once there, discovers specific areas of interest. Once that's happened, the space opens into one of collaboration: some learn all they can about one figure, one aspect of the story, while others focus on transcribing manuscripts, studying ships' plans, re-interpreting Inuit stories, or poring over satellite photographs. With the aid of modern technology, the pace of what's possible increases, and at every turn, collaboration can solve some of the most difficult enigmas. Some of this happens in the congenial company of the Remembering the Franklin Expedition Facebook group, but it also happens via e-mail, notes and comments on online blogs and forums, and through visits to far-flung archives and museums. Over the past several years, many enigmas have been solved -- or at least, had their basic questions clarified and evidence re-examined -- through this large and growing online community.

All of which makes in-person gatherings all the more special. I was fortunate to be part of two of these while on my trip: first, the 16th annual Sir Ernest Shackleton Autumn School in Athy, County Kildare, Ireland, and second, the RTFE meetup at the Trafalgar Tavern in Greenwich. The Shackleton School, which I was delighted to return to after my first lecture there in 2009, was organized around specific talks and events: Huw Lewis-Jones launched and lectured on his and Kari Herbert's new book Explorers' Sketchbooks, while I was fortunate to do the same for Finding Franklin. I'm particularly grateful to the folks at O'Brien's pub in Athy, who hosted my book launch, accompanied by a fantastic print representing John Torrington by local artist Vincent Sheridan, introduced by the incomparable Joe O'Farrell, followed by a lovely a capella rendition of "Lady Franklin's Lament" by Frank Nugent -- and concluding with the singular honor of being permitted to pull my own pint of Guinness at the sacred tap. 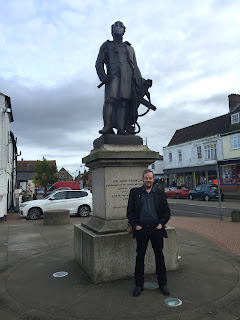 Good fellowship and lectures on a variety of subjects from both poles followed, filling the weekend with new stories and new friends, and concluding with a fabulous literary reading at the Athy Arts Centre. There, Gina Koellner and I read from Gewndolyn MacEwen's "Terror and Erebus," while novelist Ed O'Loughlin treated the audience to readings from Wallace Stevens and Alfred, Lord Tennyson, followed by a section from his remarkable new novel, Minds of Winter. And yet, as delightful as my time in Athy was, the weekend finally came to a close, and I flew off to England for a new series of wonders, including a visit to Sir John Franklin's birthplace in Spilsby, Lincolnshire, research on the "Peglar" papers at the Caird Library, and a meeting with curators at the National Maritime Museum who are involved in plans for next year's large-scale exhibition of Franklin materials, scheduled for July of 2017.

And yet, despite the value of these more "official" doings, it was the unofficial "meetup" of the RTFE at the Trafalgar Tavern in Greenwich which was, for me, the highlight of my time in the UK. For, despite our collaborative work and long history of shared interests, almost none of us in the group had ever met in person before. It's funny how well one can now know a person one has never so much as shaken hands with, and what odd details the online world leaves out. How tall is someone? What's their voice sound like? The gathering began early, at two in the afternoon on a rainy Friday, and continued late into the night, as, one by one, each of us had to leave to find our way to home and hearth. By the end, our bonds of fellowship had only grown greater, and now, when we see our profile pictures on Facebook, we'll know a bit more about one other.

There was but one sad note in the midst of our conviviality: the loss of our dear friend William Battersby. All of us had known him, quite a few had met him in person, and some had worked quite closely with him on research related to the Franklin expedition. His had been a jovial and thoughtful presence, and somehow it seemed as though his spirit remained with us, as his friend Peter Carney rose, as did we all, with a toast in his honor. The good work that he did, and the memory of his constant questioning of what we supposed we knew but hadn't checked on, will forever be remembered among us.

As the evening drew to a close, the talk was of the the large exhibit of materials related to the Franklin expedition, which will be opening in July of 2016 at the National Maritime Museum, before heading over to the Canadian Museum of History in Ottawa in January of 2017. For those of us who clinked our glasses at the Trafalgar, those dates can't come soon enough!
Posted by Russell Potter at 12:06 PM