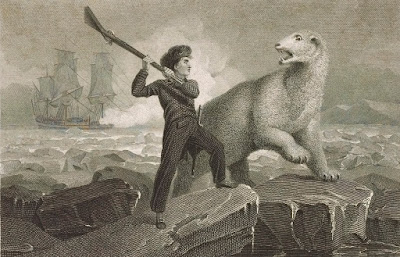 
Analyzing the heroic quest narrative, the American mythologist Joseph Campbell pointed out that it is crucial for the protagonist to face unknown dangers and to gain some spiritually or physically valuable thing. As a placeholder for Arctic adversity, the polar bear perfectly embodied such a thing. Captured alive, pictured, described for science, or slain for its meat or skin, it signified the hero’s trophy, his travails and rewards.

Landseer’s monumental canvas alludes to the fate of Sir John Franklin (Nelson’s subaltern at the battle of Trafalgar), “the man who ate his boots,” who with his sailors disappeared sometime after 1845, while seeking to conquer that other chimera, the Northwest Passage. Using dark tones throughout this painting, Landseer, who’d studied live polar bears at the menagerie at the Exeter Exchange in London’s Strand, cast long shadows upon “an English optimism and triumphalism, which was particularly apparent at mid-century.”

Franklin’s had been the largest and best-equipped Arctic expedition to embark until then. His wife, Lady Jane Franklin, who never stopped hoping for his return, attended a soiree at the Royal Academy at which the “offensive” painting was shown. Her indignation was caused by the inclusion of two polar bears that, in Landseer’s imagining of the aftermath, gnawed on a human ribcage and shredded a red British ensign, symbol of national pride. Lady Franklin’s shock at the sight of the disgraced flag could have been exacerbated by the fact that she had sewn it (or one very much like it) for her knight-errant before he embarked on his last journey. Allegedly, at home, she had thrown that silken flag over Franklin, who was stretched out on a divan, and he had startled, reminding her that the Navy covered corpses with the Union Jack before burial at sea. Superstition also surrounds the painting itself. Man Proposes, God Disposes now hangs in the study hall of the Royal Holloway (a college of the University of London) where administrators long felt it necessary to cover the work with a large Union Jack during exams. Rumor had it that a student who had looked directly at it went mad and committed suicide and that those who sat next to it would fail their exams or die. 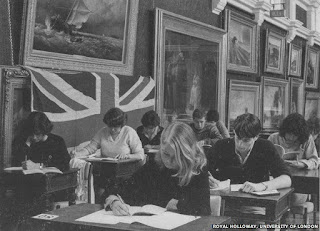 Every animal painting is also always a self-portrait, a story we tell about Nature and thereby reflective of our own nature. The red ensign in Man Proposes, which draws the viewer’s gaze, recalls Tennyson’s “Nature, red in tooth and claw”—but to pious Victorians, the horror of men having become bear prey was nothing compared to the evil whose name few dared to speak.
In 1854, word had reached London that Dr. John Rae of the Hudson’s Bay Company had met some Inuit who had learned from others that about forty white men had been seen in 1850, dragging a boat south, and that later, the bodies of those men had been found. They most likely had died from cold and starvation, but John Rae’s report included a disturbing detail mentioned by his informants. “From the mutilated state of many of the bodies, and the contents of the kettles,” he wrote, “it is evident that our wretched countrymen had been driven to the last dread alternative as a means for sustaining life.”

That the men who had been commanded by the man who once ate his boots had allegedly resorted to this outraged the civilized British. To be known as men who were savaged by polar bears was tragic, if rather interesting—“to be known as men who ate each other, unthinkable.” In light of Dr. Rae’s news, the ravenous bears in Landseer’s work became interchangeable with men, identical to them—too close for emotional comfort, which Darwin’s ideas had already disturbed.

Landseer’s monumentalized animal stands firmly in the tradition of seventeenth-century vanitas still-life paintings. In this art form, bodily remains and sundry objects symbolize vanity and the fleetingness of wealth, power, and fame—indeed, of all human endeavors—in the face of death. It is unlikely that Landseer suggested that bears had killed any of Franklin’s men; rather, he portrayed them in the scavenger mode that explorers often observed. To one reviewer, the painting’s characters looked like “monster ferrets,” which must have pained Landseer, who had gone so far as to borrow a polar bear skull from a Scottish museum in order to get the animal’s face and dimensions right. 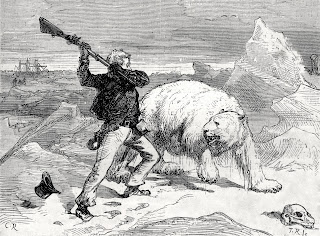 Westall’s Nelson and the Bear reflects a younger, more confident empire. It poises the plucky, fifteen-year-old midshipman and future hero of Trafalgar at the edge of the pack ice, in a frockcoat, with buckled shoes and a bonnet resembling a chef’s hat—not really dressed for such an outing. Nelson wields his musket like a club against an opponent that has flattened its ears against its head and looks more like a scared sheepdog than a polar bear.

In 1773, young Horatio’s ship, HMS Carcass, like many before it on the search for the Northeast Passage, ground to a halt in the ice near Spitsbergen. Carcass and a second ship, Racehorse, were sailing under the command of Commodore Constantine Phipps, who on that same voyage named the polar bear Ursus maritimus.

Together with a shipmate, Nelson went after the bear, whose skin he wished to give to his father. That, at least, is the story the ship’s captain, Commander Skeffington Lutwidge, started telling decades later. He added the companion and the loyal filial element only in 1809, four years after Nelson had bled to death on the deck of HMS Victory. In Lutwidge’s story, Nelson’s rusty, borrowed musket misfired and he was saved only because a rift in the ice had appeared, separating him from the bear. Westall’s painting, however, shows only Nelson, a single, steadfast Briton facing the epitome of the hazardous North. Obviously, a companion on the ice would have diminished Nelson’s glory. Westall also included, in the background, Carcass helping to scare of the bear by firing a cannon. Besides adding to the hagiography of a national hero, the work celebrated Britannia and its mariners, tougher than walrus hide.

Westall had conceived the painting as one of a series of episodes illustrating Robert Southey’s Life of Nelson, begun in 1809 and published in 1813. Southey gave his hero a line ripe with braggadocio. “Do but let me get a blow at this devil with the butt-end of my musket, and we shall have him,” Nelson supposedly shouted to his comrade after his shot had missed the bear. It gets stranger yet: Westall’s painting was copied as an engraving for the Life of Nelson by John Landseer, the father of Edwin Henry Landseer.

"Nelson and the Bear" and to a degree even "Man Proposes" follow conventions of the exploration narrative, a genre seeking to terrify and to titillate. Such dramatizations of the quest—hand-to-paw combat, hull-crushing bergs, scurvy, and starvation—hallowed soldiers and explorers, especially in premature death. By the time Landseer finished "Man Proposes," more ships and men had been lost in search of Franklin. The futility of Arctic exploration was starting to register, but British hubris and vainglory persisted until 1912, when another hero—Robert Falcon Scott—perished at a pole, and an iceberg ruined both an “unsinkable” ship and the confidence of a nation. 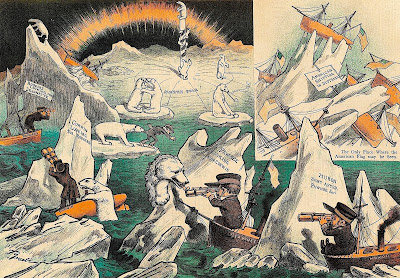 Michael Engelhard is the author of the just-published book Ice Bear: The Cultural History of an Arctic Icon and American Wild: Explorations from the Grand Canyon to the Arctic Ocean. Trained as an anthropologist, he lives in Fairbanks, Alaska and now works as a wilderness guide in the Arctic.