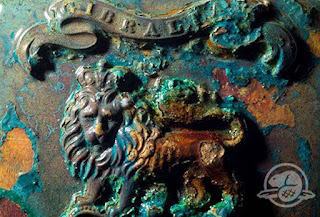 The big news out of the north this week is that there's a dispute over the disposition of the relics so far -- and yet to be -- retrieved from Sir John Franklin's flagship, HMS "Erebus." Some Inuit organizations, along with representatives of the Government of Nunavut, have invoked the archaeological section of the Nunavut Act to lay claim to the artifacts themselves, or at least to the right to insist that the protocols of the Act be followed -- which include consultation with local Inuit communities, a written application, and evidence that the person or persons doing the retrieval of artifacts has the proper archaeological credentials. According to the Nunatsiaq News, Peter Taptuna, Nunavut's Premier, citing Article 33 of the Nunavut Land Claims Agreement, says that "there are some disputes on the ownership of certain relics, certain things that are found on the sea-bed."

But there shouldn't be. Despite the fact that the NLCA has a clause stating that "this Article shall apply to marine areas of the Nunavut Settlement Area," there's a long tradition in international and Canadian law that salvage rights to ships of a nation's navy belong to that nation -- in this case, the British government. In the particular case of Franklin's ships, there also exists a memorandum of understanding, signed by representatives of the Canadian and UK government, that states that, once a ship is found, that the ownership of any articles discovered there "shall be transferred" to the Canadian government (though there has not, as of yet, been a formal enactment of this provision by the UK). Furthermore, the site of the "Erebus" (as well as the site of the "Terror," even though it's presently unknown) have been designated as national historical sites, which generally means that federal Canadian law applies and supersedes territorial law.

Parks Canada, to its credit, has -- despite the fact that it may or may not be legally required to do so -- assiduously followed the provisions of the Nunavut Act, and has consulted with Inuit throughout the process; there's certainly no shortage of qualified marine archaeologists among their team. And yet, apparently, the Government of Nunavut has balked, at least once, at allowing the work on the site to proceed. Some of the regional Inuit associations are reported to not want the artifacts to 'leave Nunavut,' apparently concerned that if they do, it might prevent their being displayed in Nunavut near the site in a manner that would help generate much-needed tourist income.

But herein lies a problem: the Nunavut Act also insists that artifacts be properly conserved and stored, and at present, there's simply no place in Nunavut that is capable of doing so. The "Nunavut collection" at the Prince of Wales Northern Heritage Centre -- which came into existence with the territory in 1999 -- is full, and in any case, the GN has not appointed any curator, or appropriated any funds, for its care. There are temporary protocols in place that have fixed this problem for now, as the Canadian Museum of Nature has become a designated repository for artifacts found in Nunavut, but of course there's no way to get the items there without their leaving the territory.

Back under the previous government, an announcement had been made that a Franklin centre was to be built in Gjoa Haven, news which -- though welcomed by most folks there -- was regarded with understandable suspicion, since the plan was announced without any consultation with the Inuit Heritage Trust or local Inuit. I think it's the hope there -- it's certainly my hope -- that the Trudeau government will honor this plan but improve upon it, taking the time to make the consultations that weren't made the last time. Having a facility there which could store and display selected artifacts properly would be a tremendous boon the local economy in Gjoa Haven and a source of pride for all Nunavummiut -- and it would, I hope, address the concerns over the disposition of the artifacts recovered, and yet to be recovered, from among the timbers of Franklin's ship.
Posted by Russell Potter at 7:41 AM