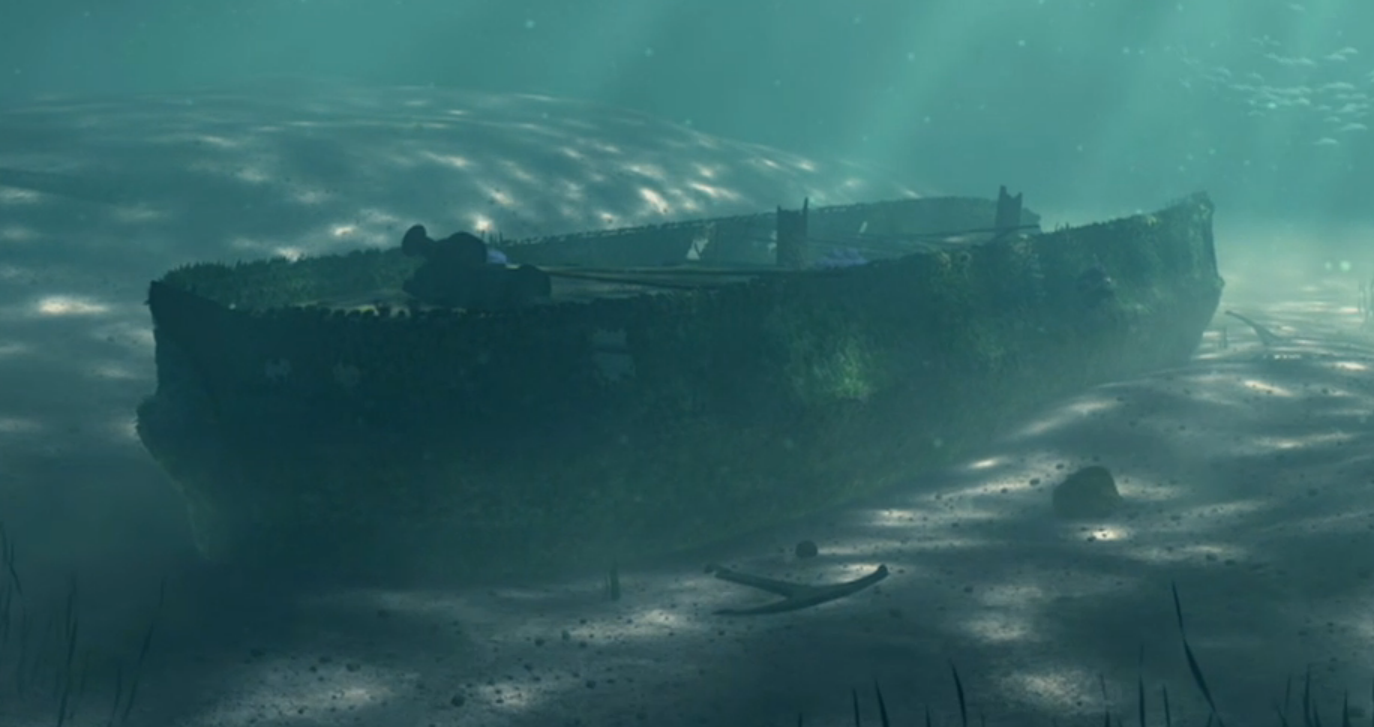 Over the years, there  have been a number of documentaries that have covered some aspect of the Franklin expedition: the NOVA/ITN Factual Arctic Passage (2005) in which I participated, as well as John Walker's Passage (2008), John Murray's Finding Franklin (2009), and Mill Creek's The Northwest Passage: The Last Great Frontier (2014) -- but whatever their good or bad qualities, every one of these documentaries lacked something that Franklin's Lost Ships alone provides: one of Franklin's ships.

The discovery of Franklin's own flagship, HMS "Erebus" in September of 2014 has already changed everything. The mystery of the expedition's failure has by no means been "solved," as some claim, but a vital piece of evidence, missing for more than one hundred and sixty years, is now before us; even as I write this, divers from Parks Canada and the Canadian military are undertaking a series of ice dives on the vessel. What secrets it has yet to disclose may only be guessed.

And so, we have a new documentary, Franklin's Lost Ships, which just aired this evening as an episode of the CBC's series The Nature of Things. I was fortunate to be able to do some historical work behind the scenes, working with the team at Lion TV in the UK, which co-produced the program with Canada's  90th Parallel. I don't appear on camera, which is quite fine by me; having done so for NOVA, I've certainly had my moment in the (Arctic) sun, and am happy to make way for others. My friends Huw Lewis-Jones and Dave Woodman acquit themselves quite well, as do John Geiger, Ken McGoogan and forensic anthropologist Anne Keenleyside (who here completes a sort of Franklin trifecta, having also appeared in both the NOVA and John Murray films).

So how was the story told differently this time? From my own experiences with these documentaries, I've learned just how hard it is to squeeze everything important into an hour, and how many people and how much effort goes into any documentary of this kind. The ITN/NOVA team had more than three years to do their work; Lion TV/90th Parallel had only seven months. The result, given the timeframe, is quite marvelous; despite the occasional glitches that, despite all care, tend to creep into any project of this scope and urgency, we have here a fresh telling of a tale that's never been able to be fully told before -- because this is a story which actually concludes with the actual discovery of Franklin's ship.

I felt that the re-enactment scenes were dramatic and effective, although unlike Passage and Arctic Passage, there was no dialogue. The costumes were well-done -- though the fur hats sported by some officers were a little odd! -- and the shipboard scenes, which used HMS Trincomalee as their setting, were particularly effective. The only thing that jangled a bit for me was that the actors didn't as closely resemble the chief officers as I'd hoped; while the fellow who played Franklin was a fair match (despite a perhaps too-prominent five-o-clock shadow), the actors representing Crozier and Fitzjames didn't look like them at all. Never the less, the drama was well-played, and along with well-rendered CGI versions of the ships, set the stage effectively for what was to come.

The on-camera experts did their job well, though I would have wished for a bit more detailed historical background; one gets the sense that there was an imperative to keep things simple. And there are some treats: we get to see the original Victory Point Record at the National Maritime museum; Anne Keenleyside graphically relates the cannibal cut-marks using a modern skeleton; Huw Lewis-Jones puts his finger, literally and figuratively, on the searches of Rae and McClintock, vividly illustrating "the true horror of this great and miserable discovery."

John Geiger gives us a strong in-person sense of the 2014 search, and both Ryan Harris and Marc-André Bernier offer vivid first-person accounts of the search for, and discovery of, "Erebus." Dave Woodman is there, too -- I would have liked to have heard more from him! -- and I think it ought to have been made clearer that the "southern search area" that the 2014 expedition turned to was that identified by Woodman from Inuit testimony, rather than just a lucky guess, as some of the voiceover seems to imply.

But of course it's the ship that's the star -- we see it in paintings and in the CGI re-creations; we experience it with the divers as they search through the debris field, and -- best of all -- we have a vivid CGI version of the hull as it lies today on the sea-floor. The ship's bell should perhaps get a credit to itself -- it's been woven into the re-enactments (we see it as the officer of the watch strikes the hour) and now, here it is, on the upper deck, its date -- 1845 -- legible despite silty water and marine growth. It's a sight that evokes the tragedy of other great wrecks, such as that of the "Titanic," and although so far, at least, we can't penetrate the ship's interior with a ROV-mounted camera, the sight of a table-leg in the debris that could have been from Franklin's captain's cabin sends a chill down our collective spines.

There will be other versions of this documentary -- the UK one will have a different text and voice-over, and there's to be a 90-minute one designed to be shown at film festivals. By the time that's out, there may well be new discoveries to add to that of the ship, and which may indeed require a change in the way the story is told. At the end, as with the NOVA documentary, we trace the fading footprints of the last few men who abandoned the "Erebus," and Lewis-Jones offers a fitting epitaph to "that last surviving band, the final fire before the flame goes out ... these man have in effect completed the final link in the chain of the Northwest Passage."

I couldn't have put it better myself.


UPDATE: Check out this very informative interview with director Andrew Gregg about the documentary.

Posted by Russell Potter at 8:07 AM