A Lecture from Beneath the Ice 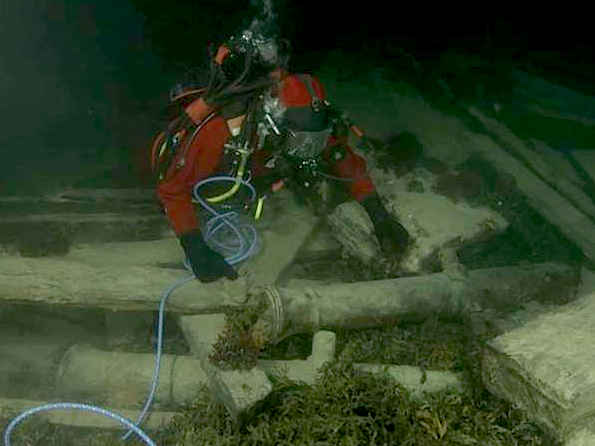 In the decades during and immediately after the search for Franklin and the discovery of the final record at Victory Point, there were many who gave public lectures on what was known -- or unknown -- about the fate of Franklin. The speakers included many leading lights of the day, among them: William Scoresby, Leicester Silk Buckingham, Charles Francis Hall, and William Bradford. Yet none ever spoke from a platform as rich and resonant with history as that occupied by Parks Canada archaeologist Ryan Harris today: the deck of Sir John Franklin's long-lost flagship, HMS "Erebus." There, whether showing viewers the six-pounder cannon, the propellor well, or the double-action Massey bilge-pump, Harris was at and upon the very vessel of his subject, with no need to employ magic lantern slides, panoramas, or PowerPoint presentations to make his gestures real. It's no easy matter giving a talk while diving, but Harris, I think, managed it with aplomb; there has never been a stronger sense of vivid, actual presence, here on the very boards where Franklin and his officers and men once strode.

That said, there are still depths at hand that this video left unplumbed -- what of the Fraser stove, sighted on last fall's dive, and apparently still in situ; what of the ship's engine, which may have much to tell us about whether it was employed to speed the vessel forward in case of calms; and what of any artifacts, whether deep aboard or scattered in the débris field? One has the sense that, just perhaps, there have been some other finds on this series of dives, finds whose full disclosure and significance will have to wait until the Parks Canada and Canadian Naval teams return from their Arctic sojourn.

And so all of us who feel a passionate interest in this great Canadian historical mystery now wait, with bated breath, for such news.
Posted by Russell Potter at 7:29 PM