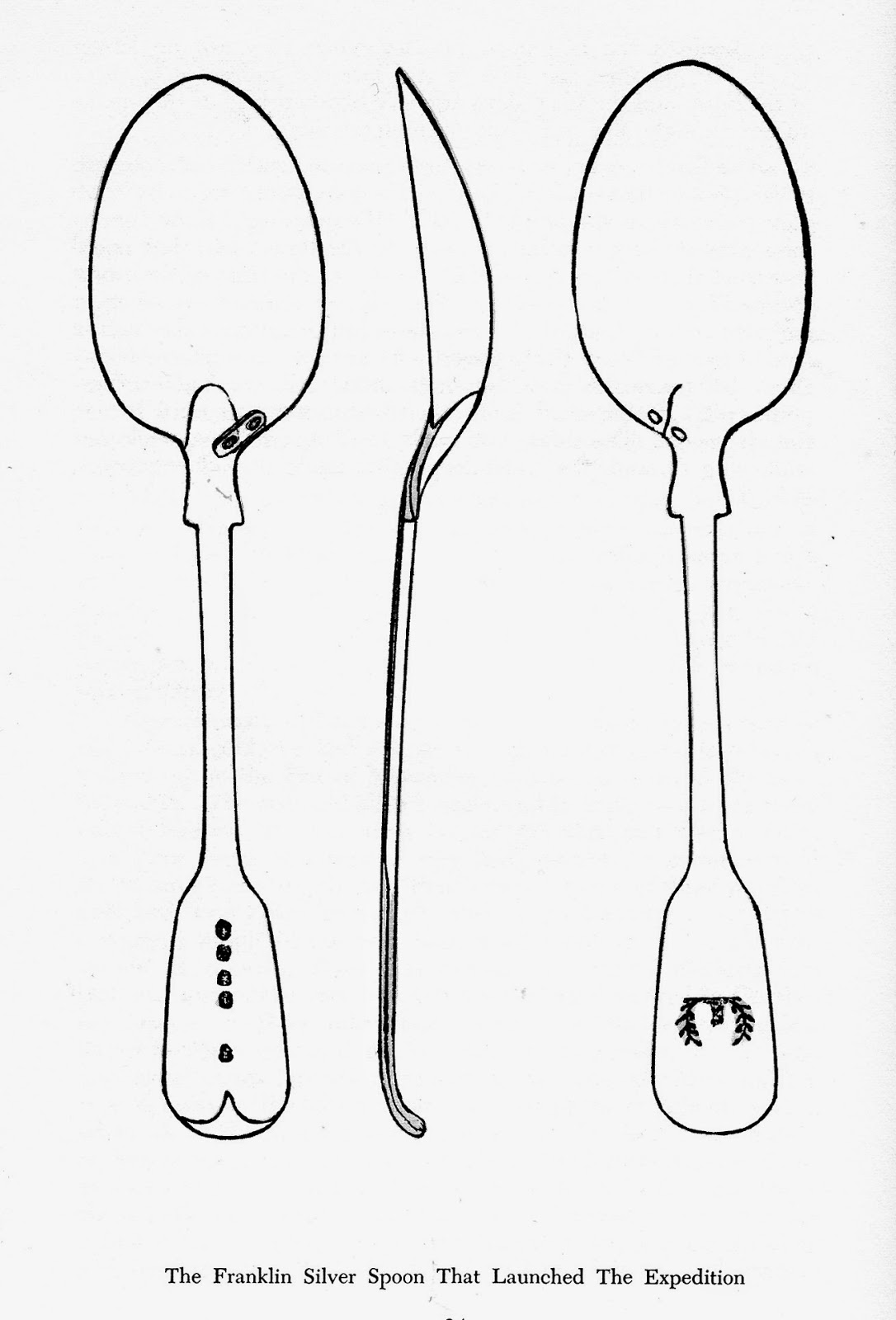 Everyone knows something about the expedition led by Frederick Schwatka to find reported documents left behind by Sir John Franklin's men. But few are aware that this expedition was, in fact, launched by a spoon -- or that the Inuit evidence given with this spoon pointed not to King William Island, but to another, much smaller island at the northwest tip of the Melville Peninsula. David Woodman gave these accounts a thorough examination in his second book, Strangers Among Us, but since then no one has followed up on the remarkable trail of clues that could -- just possibly -- lead to the remains of a band of Franklin survivors who almost -- almost -- got out.

The testimony was given to one Thomas F. Barry, at that time a second mate on a whaling ship wintering over near Repulse Bay (in one season) and Marble Island (on another), in 1872 and 1876, serving under Captain Edwin Potter. The Inuit told him of a cairn which was built atop a heavy stone, under which white men -- under the command of a stout man with three stripes on his sleeves -- had buried books and journal like the ones they'd seen him writing in. Barry, on both occasions, cross-examined the Inuit, in a manner that showed he was quite familiar with the pidgin version of Inuktitut commonly used with whalers. And, both times, he placed a chart in front of them and asked where they had seen these things -- and both groups of Inuit pointed to a spot near Cape Crozier on the coast of the Melville Peninsula were they'd seen a cairn, as well as to Cape Englefield and a spot just offshore from it where they said there was an island. They could not understand why this island was not on the white men's charts, but told that the party they had seen had perished there.

Barry's testimony, given to the American Geographical Society, was sent on to the Admirality for evaluation. Both Sir Francis Leopold McClintock and Dr. John Rae cast doubt on the tale, both because they didn't think the pidgin Inuktitut used by Barry was adequate to understand the Inuit accounts fully, and (in Rae's case) because he himself had built a cairn inland from Cape Crozier, and believed this was the one in Barry's story. Indeed, Charles Francis Hall had also visited the spot, though due to deep snow and a lack of tools it isn't clear whether he would have been able to get down to the large rocks the Inuit told of. Rae also declared that Cape Englefield an unlikely place for any Franklin survivors to have journeyed, it being “the last place that any one in distress would think of going to with the object of obtaining assistance and succor.”

But he hadn't thought about the island. Indicated on modern maps as "Crown Prince Frederik Island" (a result of its rediscovery in 1922 by Peter Freuchen) it's actually a good deal more hospitable than its neighboring cape; the U.S. Hydrographic Office describes it as "mostly quite low, composed of sand and small stones," and it could readily have been seen as an ideal site for some kind of camp. But why, after all, would a Franklin party aim for, let alone reach, such a distant destination when all the testimony we have suggests they tried heading south, either to the Fish River or perhaps Repulse Bay?

I can think of one potential answer: since Francis Crozier had spent considerable time among the Inuit at Igloolik while on Parry's second expedition (1821-23), perhaps he would have considered heading in that direction. A camp at Crown Prince Frederik Island might have been meant only as a way-station, before it became a final resting place. This island, so far as I know, has never been searched for any trace of Franklin.
Posted by Russell Potter at 5:55 AM