Sacred from Every Eye But Mine: Sir John Franklin's Lost Journal 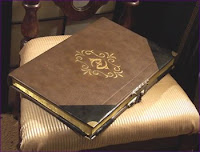 The talk about the possibility of recovering papers and logbooks from the wreck of HMS "Erebus" brings to mind the persistent hope of Franklin searchers over the years that some written documents may yet be found. The ships' log-books would certainly be of enormous value, and might well have been cached on land; more valuable still would be one of the officer's journals. As Ralph Lloyd-Jones recently observed, though, there would not have been any official logbook kept by Franklin himself -- for, altough the commander of the Expedition as a whole, he was not the captain of either vessel. And yet, as it happens, we do know that Sir John Franklin's kept his own personal journal -- in fact, we have a physical description of it from Lady Jane Franklin herself!

Writing on December 15, 1854 to James Anderson, who had been selected to lead a Hudson's Bay party down the Fish River to search the area where it seemed Dr. Rae's evidence pointed, Lady Franklin made two quite singular requests. The first, touchingly, was for a lock of her husband's hair, should his body be found:

I do not expect my dear husband to be amongst the survivors -- if you should meet with his corpse which I think will be found wherever the ships are found, I beg you to bring me his locks of hair ..,

Yet there was also another sort of lock, one which Lady Jane implored Andserson not to open:

I also entreat you to bring me sealed up and directed to myself all the letters you can find addressed to him or me which may be supposed to have been in his possession. I feel that my dear husband's private letters and papers ought to be sacred from every eye but mine ...you must not attribute to me a want of confidence in your honor as a gentleman, a man of conscience and feeling. In your hands these cherished relics will be safe,but I wish you to give strict injunctions to all under you to observe the same precautions ... I shall give £700 reward to whoever brings or forwards this packet ... My husband took with him a bound quarto memorandum book in which he was to write his private journal -- it had brass at the corners and a lock and key -- this also I desire to possess and it will meet with the reward.

The detailed description of this book is striking -- as is Lady Jane's request to Anderson that he return but not read this "private" journal. For understandable as her request was, it was also -- strictly speaking -- a violation of Royal Navy protocol. In Franklin's orders, in paragraph 22, he was given the customary command:


On your arrival in England you are immediately to repair to this office, in order to lay before us a full account of your proceedings ... taking care to demand from the officers, petty officers, and all other persons on board, the logs and journals they may have kept, which are to be sealed up, and you will issue similar directions to Captain Crozier and his officers. The said logs, journals, or other documents to be thereafter disposed of as we may think proper to determine.

Today, of course, these orders are long lapsed, and the British government has given permission for Canada to take possession of any artifacts found in the current search for the lost ships. If left on board one of the vessels, such written materials may yet have a further lease on life; at the low temperatures and low oxygen content of Arctic waters, they are even less susceptible to decay and damage than if they had been left on land. Articles of similar fragility -- playing cards from RMS Titanic, along with a remarkably-preserved bowler hat -- have been retrieved elsewhere. Whatever is found, I shall myself be on the lookout for a bound quarto volume, its corners tipped in brass, locked away with a lock whose service, once so dear to Lady Franklin's hopes, is now no longer needed.
Posted by Russell Potter at 9:04 AM