Inuit Testimony and the Franklin Ship 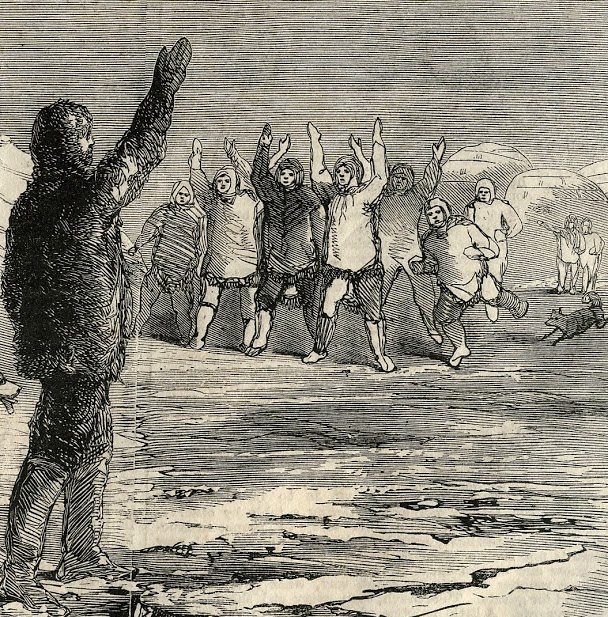 It's good to see that there's been plenty of news coverage which has acknowledged that the Franklin ship discovered a few days ago was found in a place (off Hat Island) and in circumstances (in shallow water, such that the tops of its masts could be seen, at least until the ice broke them off the next season) that exactly match Inuit oral traditions. Few, however, have quoted much from the historical record of Inuit testimony. I believe that these records still have something to tell us, and one aspect of that testimony could soon be tested again: which ship is this?

According to the Inuit, the ship aboard which they had often seen "Too-loo-ark" (Franklin) was "overwhelmed with heavy ice in the spring of the year. The men all worked for their lives in getting out provisions, but before they could save much the ice turned the vessel down on its side, crushing the masts and breaking a hole in her bottom, She sank at once, and has never been seen again. The other ship, spoken of as seen near Ook-goo-lik, was in complete order. For a long time the Inuits feared to go on board. On the report of one of them that he had seen one man on the vessel that was alive, many of the Inuit visited it, but saw nothing of the man."

It's clear from this testimony that it was HMS "Erebus," Franklin's ship of command, that sank first -- which would mean that the ship discovered by Ryan Harris and his Parks Canada team would be HMS "Terror." If they can get divers, or a ROV, in position at the stern of the ship (part of which appears to have broken away) they may be able to get images of the ship's engine. And we know quite a bit about the engine that was installed on the "Terror" -- thanks to research by blogger Peter Carney, it now seems most likely that it was a "Archimedes"  2-2-2 engine built by G & J Rennie, although some records suggest it could have been an 0-4-0 Stephenson goods engine.  Either engine has enough distinct features that, even missing their original wheels and carriage, they ought to be fairly easily identified if clear images can be obtained.

And there are a number of other details that might be verifiable with good imagery:


Puhtoorak told how the Esquimaux, not understanding how to get into the ship, cut through one side. When summer came and the ice melted the ship righted herself but the hole in her side being below the water line she sank as the water poured in. After the ship sank, they found a small boat on the mainland. When he went on board the ship he saw a pile of dirt on one side of the cabin door showing that some white man had recently swept out the cabin. He found on board the ship four red tin cans filled with meat and many that had been opened. The meat was full of fat. The natives went all through the ship and found also many empty casks. The found iron chains and anchors on deck, and spoons, knives, forks, tin plates, china plates, etc. When the ship finally sank her masts stuck out of the water and many things floated on shore which the natives picked up. He also saw books on board the ship but the natives did not take them. He afterwards saw some that had washed ashore. He never saw any stone monument or cairn on the mainland near where the ship sank. There was one small boat hanging from the davits which the natives cut down. Some of the ship's sails were set.

We're seeing some of these iron chains today. Will we see a hole in its side below the water-line, one deliberately cut? Only time well tell.  But it's very hopeful that the ship was said to be "in perfect order"; this suggests that those who abandoned it took care to set things in order before they left, even sweeping out the cabins. Let's hope that they made sure to leave behind a secured copy of the ship's log and other papers indicating the events before its abandonment. And books? How I would love to browse that library. If these kinds of paper materials can be recovered, the Franklin story will have a completely unexpected new chapter.

Posted by Russell Potter at 7:04 AM