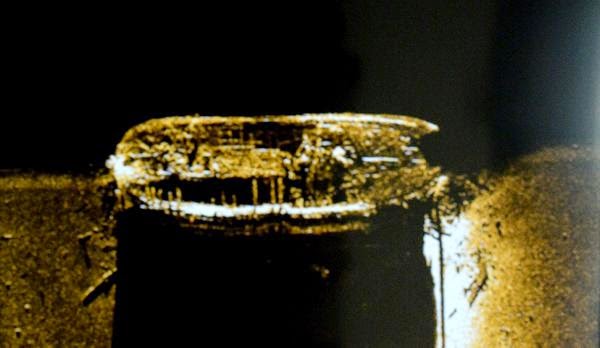 So word now is that a vessel has been found. Let's call this "vessel #1" -- it's certainly either the "Erebus" or "Terror" -- and apparently, as I'd always suspected, it's the more southerly of the two vessels, the one that was piloted or drifted well south of Victoria Strait, that's been discovered. This is the ship that was anchored not far offshore from an island and sank after being frozen in for a season in shallow water such that the tops of the masts could be seen.  The exact location, sensibly enough, is not being disclosed, but seems to lie to the southwest of King William Island, off the western or northwestern extreme of the Adelaide Peninsula, in what Parks Canada refers to as their "southern search area."

This must be the very ship that was talked about in Inuit tales for many years, the one they visited and explored after it had been abandoned, the one in which they found the body of a very tall man in one of the cabins. The current years' searchers can thank the ice that prevented them from searching for the more northerly wreck which, though it may be found, I believe will be in a very fragmentary condition, if anything survives of it at all.

Judging from the images, I'd say that it's intact enough that I would expect to find the boiler in situ, which will enable definite identification of the vessel. And we should also, I think, expect that a considerable amount of material representing life aboard the ship may be recovered, if the items found in the preliminary search of HMS "Investigator" are any clue. This could, potentially, include objects of metal, wood, leather, or even paper (the last of which would be a sort of "Holy Grail" to be sure).

I'm going to go back for the moment to checking the news reports, and e-mailing various people who've sought this vessel or are part of this year's team. They certainly all deserve our hearty congratulations! But let's also remember that this vindicates Inuit oral tradition, which had described a ship in just such a situation, and mentioned items from a ship found near Hat Island. It's a big day.

Posted by Russell Potter at 8:56 AM