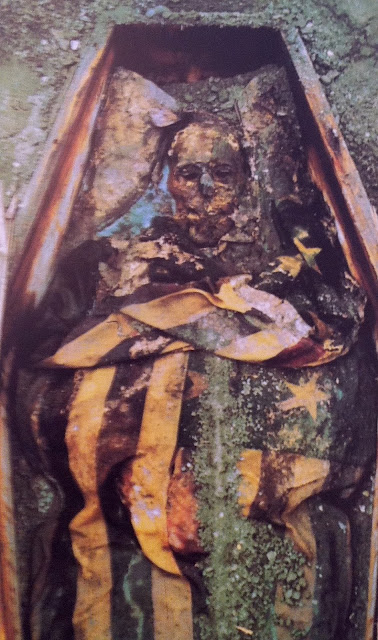 As some have pointed out, there is of course one other unquestionably authentic photograph of Charles Francis Hall -- the one taken at his exhumation by my late friend Chauncey Loomis. I suppose it's possible that the information in this image could be used to help sort out the photos -- but in any case, what's striking here is how much less well-preserved Hall's body appears to be than those of John Torrington and his companions -- why? A map of the average annual precipitation in Greenland offers one hint: "Thank God Harbor" turns out to be one of the driest places in Greenland. What I think we see with Hall's body here is that it was essentially mummified -- the water in the coffin is what was left over from hot water used to thaw the ice. In all probability, this and the colder temperatures mean that Hall's remains were better preserved than those of Torrington -- if you look at Torrington's autopsy report, you'll see that although he looked lively on the outside, most of his internal tissues had more or less dissolved due to cell autolysis.

But this remains a haunting image, and one not available outside of a first edition of Loomis's book (and then only in black-and-white). If you look closely, you can see that something of his beard remains. It's also surprising that he was buried in an American flag -- this would definitely not be the right naval or military protocol, but then again "Captain" Hall and his crew were none of them members of any organized navy.

The other question that invariably comes up with Hall's grave is whether he was poisoned, and by whom. I believe that a very strong circumstantial case exists that he was deliberately poisoned with large doses of arsenic, probably by the ship's surgeon Dr. Emil Bessels. Loomis removed tissue samples from Hall's body, and they tested positive for arsenic, but Chauncey was always reluctant to state the case too strongly. Bessels, one of the more notorious scoundrels in the annals of Arctic exploration, had many bad qualities even if one presumes him innocent of murder -- among other things, he seems to have stolen the ships' log and Hall's own diary; neither were accounted for at the time of the inquest into the death of Hall, and yet some small sections of them were published, in German, after Bessels's return to Germany (he was evicted from his office at the Smithsonian to make way for a toilet -- a definite improvement!). Perhaps someday these documents will re-surface, and we'll know more; until then, Loomis's Weird and Tragic Shores remains the best account we have, and one of the finest books ever written about Arctic exploration.
Posted by Russell Potter at 6:38 AM