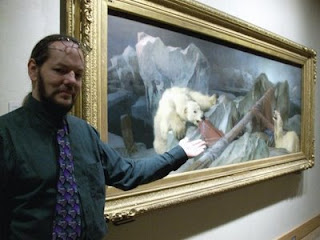 I just arrived back late last night from my lecture on Sir Edwin Landseer's "Man Proposes, God Disposes," currently on display at the Yale Center for British Art. It was well-attended, and the audience was wonderfully diverse in every sense -- in age, in background, in interests, in expertise. I was especially delighted that my partner Karen Carr and my daughter Caeli were there, along with my dear friends Mary Cappello and Jean Walton (thanks, Jean, for the photo!). This painting, along with the rest of the Royal Holloway's touring collection, has been expertly hung and lighted, and has never looked better. It's also worthy of note that the frames, which were originally all glazed and made with specially-designed latches for removing and cleaning the glass, are now hung almost entirely unglazed, which offers a view long unavailable in their original home. Landseer's carnivorous canvas finally gets its due.

There is an enduring anxiety about these bears, one which was the subject of several questions after my lecture. One person in attendance, an alumna of Royal Holloway, offered her recollection that the painting was hung with a Union Jack -- reversed -- during exams, as though the mirror image would better defeat the harmful rays of the naval ensign in the painting. She vividly recounted the anxiety of those who sat near. What horror still exuded from them nearly 150 years after they were painted? I offered my own view that the bears, in all their muscular horror, were more or less stand-ins for fears of cannibalism.

And yet whether or not these bears were simply representatives of animal appetite -- or else subconscious representatives of the upgorged horror of the "last resource" was a matter of debate. Scott Wilcox, the YCBA's curator of graphic arts and an expert on panoramas, asked whether the bears might not offer the relief of resolution -- after all, if 'the bears did it,' then there was no further need to probe the scene in search of something far worse. Ultimately, many present felt that the bears could be both a potential guard against far worse images, and an embodiment of the very fear thus allayed -- and I heartily agreed with this view.

But why not judge for yourselves? This magnificent show runs through July 26th, and New Haven is an easy day-trip for anyone in the greater New York or greater Boston areas. These paintings, as a collection, will not travel again soon, and you may be surprised to find that even the most difficult to please of museum goers -- children -- will at once be drawn to Landseer's portrait of these astonishing creatures, and will be led by them through the rest of a gallery filled with an abundance of Victorian riches.
Posted by Russell Potter at 5:39 PM