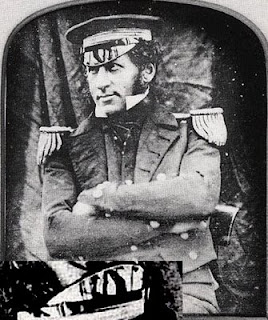 In my last posting, I gave some general background on the Daguerreotypes made of Franklin and his officers just before their sailing in May of 1845.  There, I hinted that there was something further to be learned.  With thanks to my esteemed friend Dr Huw Lewis-Jones of the Scott Polar Research Institute, who first observed this phenomenon, I pass along a vision recovered from the reflective bill of Lieutenant Graham Gore's cap (see detail, inset).  The image seems clearly that of a ship, indicating that Gore's portrait was taken at dockside.  Yet which ship is it?  It seems to me to be a view of the stern of some vessel, but without any sails or rigging clearly visible.  There seem to be masts, but one of these appears bent, and connected with another protrusion.  Could one of these be the smokestack of a ship's engine, and a plume of smoke the source of this connection?  If so, the vessel would seem to be either "Erebus" or "Terror."  And yet tellingly, a line seems to extend from the ship's stern (if so it is), as though it were towing another vessel.  If that's the case, the ship could be the screw steam sloop HMS  "Rattler," for it towed both "Erebus" and "Terror" as far as Cape Wrath off Scotland.  Unlike the discovery ships, which would have hoarded their coal for later, the Rattler would have been under full steam for the journey, and was far more likely to be exuding smoke during the photographic session.  Rattler was the first screw-propeller driven warship in the world, and had famously won a contest with the side-wheel steamer Alecto, proving her pre-eminence by dragging the Alecto backwards at a speed of 2 knots in March of 1845.  The propellor of the Rattler is on display in Portsmouth to this day.

But what else can we learn from these Dauguerreotypes?  My acquaintance Bill Schultz, a collector of and expert on early photography, prepared a lengthy essay on them for the 2005 edition of the Daguerreian Annual.   Schultz specializes in military and naval images, and his commentary describes each officer's uniform in detail.  For example, Franklin is wearing "a Cocked Hat or Chapeau, bound with black silk, which would have four loops of gold bullion with two center loops twisted."  Gore, above, "wears the undress uniform of a Lieutenant according to the uniform regulation of 1843; his epaulettes have shorter braid (than those of a commander or captain) and would have been without any insignia on the strap or in the crescent."

Is there more?  Clearly, the photographer sent by Beard's firm chose at least two different settings, or allowed the officers to do so.  Most of the subjects -- Franklin himself, Crozier, Fitzjames, Gore, Fairholme, Couch, Des Voeux, Sargent, Reid, Collins, Stanley, Goodsir, and Osmer, posed before a cloth backdrop; judging by Gore and Fairholme, this studio was set up dockside.  The backdrop varies somewhat; in Goodsir's case, it seems draped or curtained, with light passing on either side, while with the others, it appears flat and opaque.  Only Le Vesconte seems to have chosen to be photographed aboard ship; he stands with the wheel visible behind him, and a coil of rope hanging from the mast.  In his hand he holds a book with a paper label on its cover, idnetified by Schultz as the ship's log.  Ah, what any of us would give to have that book once more in our hands!

There is surely still more to be learned from these images; the Daguerreotype process produces plates with an incredible level of detail, as the grain size was as little as that of a single silver halide crystal.  The originals, properly copied, could be blown up by a factor of hundreds, and yield surprising results.

Reproduced in the pages of the Illustrated London News and Gleason's Pictorial, endlessly peered at in hopes of some new insight, these memorial versions of the Franklin expedition's officers have a haunting quality -- for they were the first, as well as the last, we would ever have of these bold and tragic figures.

Posted by Russell Potter at 4:50 PM