A Season of Marvels

For myself and my fellow editors of May We Be Spared to Meet on Earth, it has been a season of marvels, one for which all of us are enormously grateful. Although not all of us were able to be present at every event, we collectively felt and experienced a tremendous outpouring of interest in and support for our book.

It all began in Ottawa on September 26th, with our launch at 50 Sussex Drive at the headquarters of the Royal Canadian Geographical Society. It was a special pleasure here to share the event with Matthew Betts and his extraordinary book on HMS Terror; the audience's interest naturally extended to both volumes, as did their thoughtful, well-informed questions.

Our next event was thousands of miles distant -- at the National Maritime Museum in Greenwich in the UK. Here, Gina was able to join us (photo above), and our UK friends -- many of whom we'd not seen in two years or more -- were present; curator Jeremy Michell gave us a very fine introduction. Scarcely a day later, three of the four of us were on flights to Dublin, whence we made our way to Athy and this years Shackleton Autumn School. It was a special pleasure to see so many old friends and fellow polar enthusiasts, among them Joe O'Farrell, Bob Headland Rob Stephenson, Geir Kløver, and Medbh Gillard. Our launch there, hosted by our good friends at O'Brien's pub, was also wonderfully enhanced by a resounding version of Lady Franklin's Lament provided by the shantymen of Hooks and Crookes. 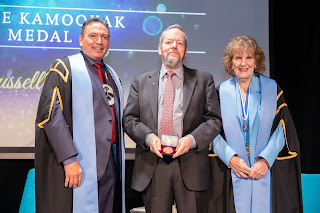 Then, in a return to Ottawa, came a further bow for us all. I was deeply honored and gratified to be awarded the Louie Kamookak medal, named after my late friend and Inuit historian, and to welcome Peter, Mary, and Gina as Fellows of the RCGS. As an added bonus, we got to meet Jared Harris, whose wonderful portrayal of Francis Crozier on AMC's The Terror we all admired, along with David Kajganich, the series' writer and showrunner! The gala dinner at the Canadian War Museum was a memorable evening for everyone present.

And so, while we don't have any further events planned at present, we're looking forward to a less far-flung holiday season -- and to those copies of our book that many (including ourselves) will be placing under their Christmas trees this year, lying in wait -- or so we hope! -- to convert more people yet to our wonderful shared obsession.